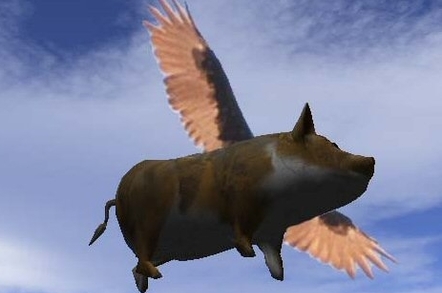 In an eyebrow raising presentation the chief information officer for the US's foreign spying wing, the CIA, has praised the cloud computing capabilities of Amazon Web Services and said the agency wants to expand its use of the company's tech.

CIA CIO Doug Wolfe spoke at an event in Washington on Tuesday where he said he was confident the spy group would "end up in a very good quality product, and a very secure product," after awarding a procurement contract to the company worth as much as $600m.

Now, before the paint has even dried on the private cloud Bezos & Co are building for the agency, Wolfe says his organization is planning on expanding the use of the tech.

"I am determined that we will not only have the innovation on how do we spin up the servers... but we're going to start to bring the innovation from the commercial sector, in terms of applications, to the mission space as well," he said, according to the Financial Times.

He also said that by using the as-a-service cloud resources, the CIA may be agency to save money by not over-ordering the IT it uses.

"If you're a government customer who has been used to just ordering up however much IT you want, and over-ordering typically — which people do, they often order for their peak need — if you're a government customer used to doing that, you're going to start getting a bill," he said, the Washington Post reported. "You're going to start seeing exactly what your consumption cost, and start understanding exactly how server storage processing, et cetera, was applied to the problem. So we see this as a tremendous opportunity to sharpen our focus and be very efficient."

For the CIA to say such a thing is significant as many detractors of modern cloud computing technologies have said they lack the features key for mature enterprises. We'd hazard a guess that the information processing needs of the CIA are just as complex in terms of policy requirements as any typical large business.

The CIA awarded Amazon a major procurement contract in February last year worth hundreds of millions of dollars for a strategically important cloud service for the agency. What made it newsworthy was the company Amazon beat to win the contract: IBM.

IBM disputed the awarding of the contract and the Government Accountability Office (GAO) upheld its protest on two points. In response, Amazon filed a legal complaint to get the government to plow on ahead with its cloud rather than re-evaluating IBM's. In October, IBM withdrew its formal protest of the CIA picking AWS. Nonetheless, in November The United States Court of Federal Claims published a stinging court opinion that lambasted IBM for trying to "manipulate" the procurement process in its favor.

With the CIA now buying and using IT developed by a company VMware memorably termed a "bookseller", it's clear that a lot of the claims made against the technical capabilities of the modern cadre of IT companies are just a load of FUD. ®