Doobie or not doobie? That's the question... the cops will ask 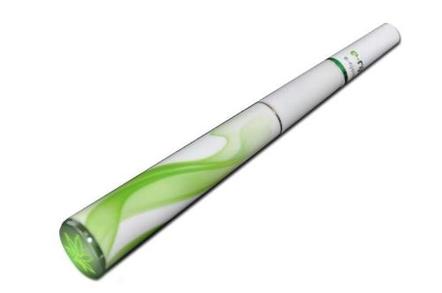 Do you want to be as stoned as Bob Marley but keep on jammin into your middle age? Then you're in luck, because a Dutch firm is riding high after introducing the world's first ever electronic doobie.

The iSpliff is designed by Dutch firm E-Njoint BV and allows no-smoke-tokers to inhale liquid cannabis, using a similar method to electronic cigarettes.

It is designed to be more healthy on the lungs than smoking weed, but still powerful enough to get the user totally bongoed.

The device was dreamed up in Holland, a country that has regulated the sale of marijuana for years.

E-Njoint CEO Menno Contant said: "Holland is well known in the world for its tolerant and liberal attitude toward soft drugs and the introduction of this new product clearly makes a statement.

"As long as you don't bother or disturb other people and stay within the legal boundaries, all is well."

Whilst the device is the first e-cig for the green, there has been a move towards vaporizing cannabis among hardened potheads.

The English rapper Big Narstie, a well known ganja-guzzler, recently released his own brand of vaporizer called the Base Pen, which turns herbal cannabis into an intoxicating vapour.

Smokers too are ditching the cancer sticks and choosing e-cigs, a move which is not entirely welcomed... by the tobacco manufacturers.

There are still concerns about uncharted health risks, as well as paranoid ramblings warnings that the tobacco industry is using the devices to snare a whole generation of new addicts.

Kelly Evans, director of research and campaign group Social Change UK, said: “Young girls told us cigarettes were yucky but e-cigarettes are not as bad.

"They’re attracted to the flavours. If e-cigarettes are just a smoking aid for adults, why a gummy bear flavour?”

Just wait until they get their hands on the digital doobies. ®