Got a botnet? Thinking of using it to mine Bitcoin? Don't bother 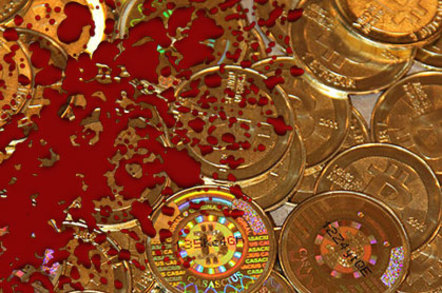 Despite an increase in popularity over recent months amongst botnet operators, malware-powered Bitcoin mining brings little to no financial return, say experts.

Security giant McAfee contends in its quarterly threat report (PDF) that commercial botnet controllers and malware packages have been adding cryptocurrency mining options to their list of services offered.

The mining tools - offered alongside botnet task options such as spam runs or distributed denial of service (DDoS) attacks - put infected machines to use mining Bitcoin.

Unfortunately for the cybercrooks, however, it seems that a botnet-turned-mining rig doesn't actually make much money in real life. McAfee found that the increasing difficulty of Bitcoin hashes, combined with the attrition rate from malware detections on infected machines, would make turning a profit from botnet mining nearly impossible.

"We now see botnets with various levels of virtual currency–mining functionality," McAfee said in the report.

"But even if we allow a zero cost for hardware and power (the costs of the bots and their power are borne by the victims), the difficulty level of common mining algorithms and the nonspecialized hardware that the malware infects make this a futile effort."

According to researcher estimates, a botnet controller attempting to mine Bitcoin with a 10,000 system network would initially see a net loss in operations and with increasing difficulty cycles productivity would plateau off without turning much of a profit.

That rate becomes even lower when mobile devices are added to the equation. Researchers note that with less powerful processors and limited battery life, mobile devices are ill-equipped to function as dedicated cryptocurrency mining tools, especially when this is done via covert malware infections.

Researchers conclude, therefore, that botnet kingpins are better off avoiding the Bitcoin mining game and sticking with other techniques.

That would come as little relief, however, to owners of infected machines who will see their system performance and battery life take a hit whether or not the miner turns a profit. ®