Cloudflare claims tip-off allowed it to tip traffic into sinkholes 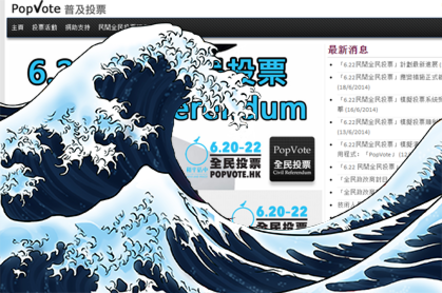 One of the largest and most sophisticated distributed denial of service (DDOS) attacks has hit a controversial online democracy poll canvassing opinion on future Hong Kong elections.

Over the weekend some 680,000 people cast votes in the unofficial poll that offered residents of special administrative region to highlight their preferred political representatives.

Candidates were officially chosen by a 1,200-strong committee that was widely considered to be very sympathetic to Beijing.

Security outfit CloudFlare said it was still fending off the sophisticated DDoS attack as of Monday morning, long after the polls closed.

The company's founder and CEO Matthew Prince said it was the most sophisticated attack yet seen.

"We saw 300Gbps at the peak of the attack, but it was likely significantly larger than that," Prince told The Register.

"This may well have been the largest attack we, or anyone else, have ever seen. It definitely was the most sophisticated."

While perpetrators were not named, Popvote.hk was an obvious direct threat to Beijing which had planned to introduce universal suffrage for Hong Kong by 2017 at the earliest.

Cloudflare says it was tipped off ahead of the compute-draining attacks and set up a series of DNS sinkholes that stonewalled the attack traffic so it never reached Cloudflare or Popvote.hk.

"Since we had advanced warning the attack was coming, we'd put in place measures to sinkhole traffic in certain regions so it never hit our network," Prince said.

This is new: Layer 7 HTTPS flood that prioritizes TLSv1/DES-CBC3-SHA, which is CPU intensive. #clevergirl

The website was closed off to residents outside of Hong Kong to minimise load on the site. ®