Barack Obama was almost eaten by a robot giraffe 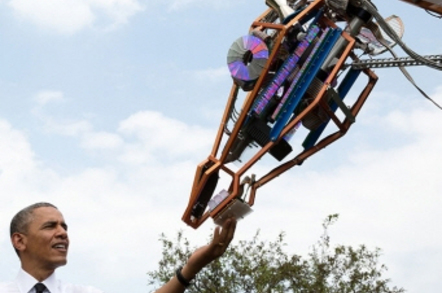 A British mechanical giraffe evaded American secret services, infiltrated the White House and got close enough to Barack Obama to bite his head off.

The robotic beast narrowly avoided sparking World War III after appearing at an event in the White House intended to show off the work of American "makers".

The President was shocked to hear the giraffe speak in a British accent - and so was the secret service agent assigned to protect him.

"He has kind of a British accent," the President said after petting the beast's nose. The video below shows one of Obama's bodyguards rushing to save him from the robot giraffe, before the video is quickly shut off.

So how did this strange creation get so close to the President?

By mistake, apparently. Only American creations were meant to appear at the White House Maker Faire, which was the first such event to be held in the garden of Obama's temporary home.

It is the creation of Russell Pinnington, who works as an IT bod at the British firm Holidays Please.

Somehow he managed to sneak Russell the Giraffe past "three layers of secret service security," his boss, Charles Duncombe, told us.

"We have lost so much time to this bloody giraffe," he said.

"Russell is forever flying out to America to work on the giraffe, which he takes to the Burning Man festival. But we didn't expect to see it in the White House.

"If we start seeing drone giraffes in Afghanistan, we know who to blame." ®

Pinnington has been in touch to tell El Reg that the giraffe was created by Lindsay Lawlor of San Diego, while he sorted out the electronic gubbins inside it. We're of the view that this makes the giraffe British at heart and thus still worthy of representing Blighty at the heart of the US government.