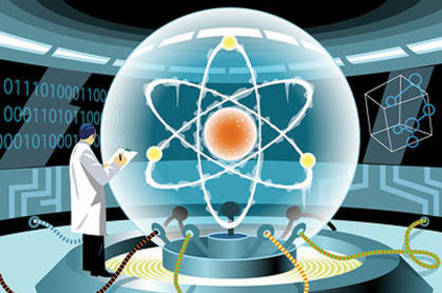 On Thursday an international team of computer scientists published a widely previewed paper in Science detailing a series of benchmark tests pitting a 503-qubit D-Wave Two device against custom computer code running on standard GPUs. The team reports that while the D-Wave system was faster in some instances, it was considerably slower in others.

"Using random spin glass instances as a benchmark, we find no evidence of quantum speedup when the entire data set is considered, and obtain inconclusive results when comparing subsets of instances on an instance-by-instance basis," wrote the paper's lead author Matthias Troyer, a physicist at the Swiss Federal Institute of Technology.

The publication has caused something of a headache for D-Wave – and for Google, which bought one of the Canadian firm's computers last year. Some commentators have questioned the ability of D-Wave's systems to perform quantum calculations, and this latest study is from a respected team of scientists.

Colin Williams, director of business development at D-Wave, told The Register that the company has gone through the Troyer paper in detail, and thinks it knows what the problem is. In essence, the tasks set for the two computing systems were too basic for an accurate benchmarking figure to be achieved, and the number of datasets was too low.

"If you're trying to benchmark performance of a Ferrari verses a bicycle, if you put them both on a hill and let them run down the hill, then then you won't see as big an advantage for the Ferrari," Williams told us. "That's basically what happened in this test, the benchmark was far too simple and you need to use a harder selection of problems."

In addition, the GPU code Troyer's team was using had been tightly optimized for the problem set, Williams said, whereas the D-Wave system wasn't optimized for that particular benchmark code.

Google also issued its own response to the Troyer paper, noting that in its tests the firm is getting computational speeds of over 35,500 times that of conventional computing systems. It all depends on what you use the system for, it seems.

"Eyeballing this treasure trove of data, we're now trying to identify a class of problems for which the current quantum hardware might outperform all known classical solvers," Google said. "But it will take us a bit of time to publish firm conclusions."

Williams said that D-Wave hadn't heard any grumbling from customers after the Troyer paper, and work is continuing as normal. He also said that the firm has a new, upgraded quantum processing system coming out by the end of the year that will increase speeds further. ®

At least someone's putting their money where their mouth is