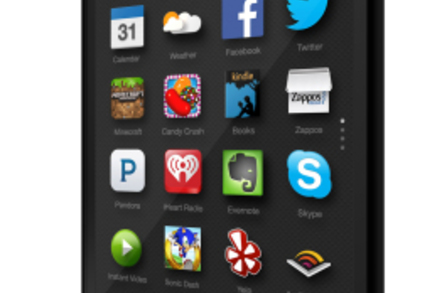 If you like smartphones and you like shopping, then you just might like the Fire Phone, the first handset to be released by Jeff Bezos' etail juggernaut Amazon - and as you'd expect, it's all about shopping.

The announcement that Bezos' e-tail titan plans to release an own-branded mobe came as no surprise, but what was actually shown at the launch event in Seattle on Wednesday didn't quite match what was hailed in early rumors.

More than a year ago, reports surfaced claiming Amazon was working on a phone with a screen that would be able to display hovering, stereoscopic 3D images without requiring the user to wear special glasses.

What we got instead was a tech that Amazon is calling Dynamic Perspective. While it does rely on four tiny cameras and four infrared LEDs to track the position of the user's head – as was previously thought – rather than making images pop out of the screen, it allows you to use head motion and hand gestures to pan, tilt and swivel onscreen content. 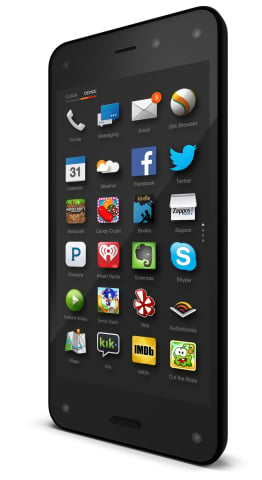 It won't project Princess Leia for you, but it can pivot

For example, in a first-person videogame you could move your head and tilt your hand slightly to peek around corners, or you can tilt the Maps app to reveal Yelp ratings – things that wouldn't be possible with most current phones. Another feature allows you to scroll continuously through content using only wrist motions.

Shop 'til you drop (the phone)

But the Fire Phone's real raison d'être is obviously not to wow customers with a novel display, but to pull them into the wide world of Amazon shopping.

The device comes preloaded with the usual variety of Amazon-centric media apps you'd expect to find on a Kindle tablet, including Amazon Instant Video, Amazon Music, the Kindle e-book reader, the Audible audiobook player, and the Amazon Appstore. Competitors' offerings – most notably the Google Play group of apps – are not included.

Another new technology aimed at shopaholics is something that Amazon is calling Firefly. The tech works with the device's camera and microphones to recognize all sorts of media around you. It can automatically recognized text scanned from posters, pages, or business cards, for example, or recognize what music or TV shows are currently playing. And, naturally, Firefly can recognize over 70 million products, just by snapping pictures of them.

Google has built similar capabilities into its Google Goggles and Google Now apps, but again, those don't allow you to search Amazon for the items you snap and buy them with the push of a button, so Bezos & Co chose to go it alone.

In fact, the Fire Phone isn't even technically an Android phone. It's running something called Fire OS 3.5.0, a new version of the Android fork that Amazon developed for its Kindle line that the company says has been customized for the new hardware.

And if all of those lovely content-buying apps aren't enough, for a limited time, Amazon will even throw in a free year of its Prime service, which includes unlimited streaming from Prime Instant Video and Prime Music, access to the Kindle Owners' Lending Library, and – yes – free two-day shipping on all that stuff you're going to be buying from Amazon with your new Fire Phone.

And if you can't figure out how to get all of this high-tech wizardry working on your own, Amazon is including access to its Mayday instant live video support service, which it debuted with its Kindle Fire HDX fondleslabs in 2013.

Next page: A respectable bit of kit
Page:
Tips and corrections
52 Comments

It's technically an acquisition, but the headline fit so perfectly we couldn't resist