Splash! Three times as much water as ALL of Earth's oceans found TRAPPED underground

Can it help relieve a drought-plagued world? Well, don't water that brown lawn just yet 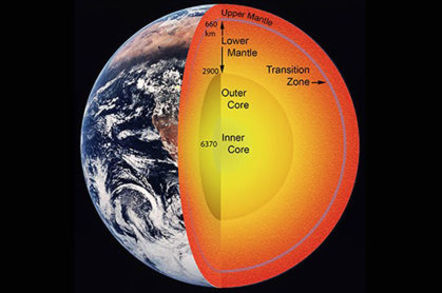 A group of US researchers has discovered evidence that deep below the Earth's surface there may be as much as three times as much water as in all of our oceans combined. 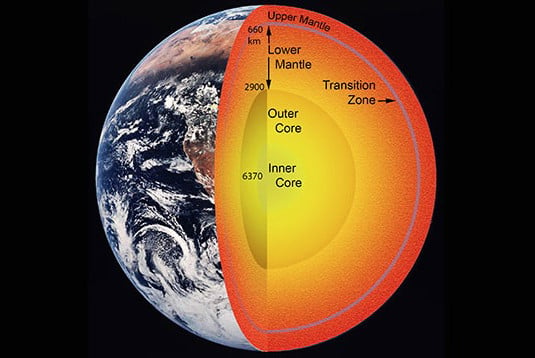 Unfortunately, at such extreme depths, the new-found treasure trove of H2O won't be slaking anyone's thirst

"The high water storage capacity of minerals in Earth's mantle transition zone (410- to 660-kilometer depth) implies the possibility of a deep H2O reservoir," reports the abstract of a paper published in Science on Friday entitled "Dehydration melting at the top of the lower mantle".

"I think we are finally seeing evidence for a whole-Earth water cycle, which may help explain the vast amount of liquid water on the surface of our habitable planet," said one of the paper's coauthors, geophysicist Steve Jacobsen of Northwestern University when announcing his team's research. "Scientists have been looking for this missing deep water for decades."

This is not, we hasten to say, the same form of water as fish swim in, clouds are formed by, from which icebergs calves from glaciers are composed, or which we silly humans pay exorbitant amounts of money to sip from plastic Desani bottles. Rather, it is bound up in a mineral called ringwoodite.

"The weight of 250 miles of solid rock creates such high pressure, along with temperatures above 2,000 degrees Fahrenheit, that a water molecule splits to form a hydroxyl radical (OH), which can be bound into a mineral's crystal structure," Northwestern's announcement explains.

"The ringwoodite is like a sponge, soaking up water," Jacobsen says. "There is something very special about the crystal structure of ringwoodite that allows it to attract hydrogen and trap water."

But how did the water get down there in the first place? And why is it pooling – well, not exactly "pooling," but you get our drift – at a specific transition zone between the Earth's upper and lower mantle?

The answer to that first question is that the Earth is not a static system. Rather, its constituent parts are constantly roiling, upwelling and downwelling, with water being drawn down to great depths, the research explains, through the subductive forces that animate plate tectonics.

That's what is drawing the water downward into the melted rock under the Earth's crust – a reasonable explanation unless you, like US congressman Joe Barton (R-TX), don't believe in plate tectonics.

But we digress – let's move on to the second question. As the water-bearing ringwoodite continues its downward movement from the upper mantle and through the transition zone, it contains a significant amount of water: up to one per cent of its weight. However, as it sinks into the lower mantle, it forms into a high-pressure mineral called silicate perovskite, which can hold almost none.

"When a rock with a lot of H2O moves from the transition zone to the lower mantle it needs to get rid of the H2O somehow, so it melts a little bit," coauthor Brandon Schmandt of the University of New Mexico says. "This is called dehydration melting."

Jacobsen concurred. "Once the water is released, much of it may become trapped there in the transition zone." So there it sits – in enormous volumes, it appears.

Jacobsen, Schmandt, and the rest of their team base their hypothesis on work done using the USArray, a continental-scale network of over 2,000 seismometers spread across the United States, and so their findings can only specifically be applied to the water-soaked transition zone they discovered beneath the area they studied. But there's little reason to believe that the same results wouldn't apply globally.

If so, the implications of this discovery are well summarized by the subtitle of the Northwestern University announcement: "Water bound in mantle rock alters our view of the Earth's composition." ®

Creationists are infiltrating US geology circles