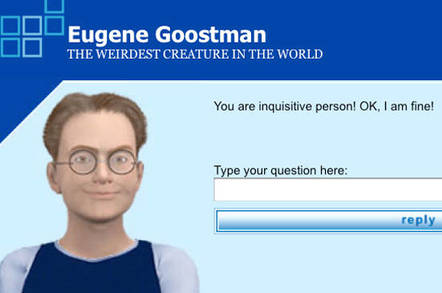 QuoTW This was the week when a piece of software (supposedly) passed the Turing Test, giving the world all the “robot overlord” headlines they could possibly need in a slow, sunny news week.

Facts were hard to come by in the tale of Eugene Goostman, the 13-year-old-boy-simulating software that apparently hit the controversial benchmark of artificial intelligence.

First it was a supercomputer, then it was just a piece of software. First it passed the Turing Test in a blaze of glory, and then it transpired that after a number of attempts, it finally convinced judges that it was a real boy just 33 per cent of the time. Nevertheless, media junkie Kevin Warwick, visiting professor at the University of Reading and head of the event, was keen to stress the momentous nature of the whole thing:

Some will claim that the Test has already been passed.

The words Turing Test have been applied to similar competitions around the world. However this event involved the most simultaneous comparison tests than ever before, was independently verified and, crucially, the conversations were unrestricted.

A true Turing Test does not set the questions or topics prior to the conversations. We are therefore proud to declare that Alan Turing's Test was passed for the first time on Saturday.

After initial excitement and abject fear of the soon-to-be-realised apocalyptic future of Terminator-style robotic subjugation had subsided, a few boffins were able to make themselves heard over the clamour and suggest that this was perhaps not the epic milestone it had been made out to be.

In 1991, “Captain Cyborg” told me that we would have real life Terminators in ten years. It was crazy then, it’s still crazy now.

He also pointed out that it might not be all that difficult to impersonate a teenager:

Besides making a computer like a teenager is easy. Needs to be in standby mode for 18 hours a day and only say “yeah, cool”.

And that wasn’t even getting into the fact that Eugene Goostman was supposedly Ukrainian, making English his second language, or that many of the judges of the Test seemed to be only peripherally involved in AI. Robert Llewellyn, whose only qualification for the task appears to be his time as Kryton on Red Dwarf, was one judge for example.

This was also the week when that global football tournament kicked off, thrilling fans and exciting the beer economy in a number of countries. While many love and revere the World Cup to an almost unhealthy degree, this one is causing a whole host of controversies, from protests against it in host country Brazil to rumblings of corruption at governing body FIFA.

Anonymous decided to get in on the action this week, saying that it would target World Cup sponsors in cyber attacks in solidarity with Brazilians who didn't feel that the millions splashed on getting the country ready for the tournament was money well spent. Hacker Che Commodore told Reuters:

We have already conducted late-night tests to see which of the sites are more vulnerable. We have a plan of attack. This time we are targeting the sponsors of the World Cup.

Meanwhile, head penguin and hot contender for the prize of most outspoken man in tech, Linus Torvalds said this week that this whole drive to make every kid in the world into a coder is utter nonsense. In an interview with Business Insider, he said:

I actually don't believe that everybody should necessarily try to learn to code.I think it's reasonably specialised, and nobody really expects most people to have to do it. It's not like knowing how to read and write and do basic math.

However, unusually for Torvalds, he did qualify that statement with a calm and considered caveat:

That said, I think people should have some way of getting exposure to it, just so that people who find that they enjoy it and have the aptitude know about the possibility. Not because everybody will want to or need to learn, but just because it is a great vocation, and there may well be lots of people who never realised that they might actually like telling computers what to do.

But, not to worry, Torvalds recovered his plucky declamatory nature when asked about patents:

It's all bullshit, sane people know it's bullshit, but making real change is difficult. Politically, the US patent system also tends to help US companies, because once you get into a court of law, it's not about the law any more (and it's certainly not about the patent, which is crap and which neither the judge, the lawyers, nor the jury will understand anyway), and it's much easier to sell as an "us vs. them" story.

How do I love patents? Let me count the ways.

In Blighty, actor and national treasure Stephen Fry was once more holding forth on tech subjects without completing the requisite research, this time to promote the .uk domain name.

In a blog post celebrating the totally awesome new option to have website.uk now instead of website.co.uk, courtesy of registry Nominet, Fry talked about how lovely it was that new domain names like these would be generating a bottomless supply of IP addresses.

A year or so back I wrote that it seemed to me annoying and lax of the British internet authority (if such a body ever existed, which it didn’t and doesn’t) when domain names were being handed that they were so inattentive and their eyes so off the ball. How come Germany could have .de, France .fr, South Africa .za, Italy .it etc etc etc? And we poor British had to have the extra exhaustion of typing .co.uk. Three whole keystrokes.

Fret no more, people of Britain. The day of .uk is upon us. And team stephenfry.com — as with all things — is proud to be ahead of the curve, or at least cresting it. stephenfry.uk is launched today with a fanfare and an unfurling of the Union Flag. Bear in mind too that if you have businesses with branches in Berlin and Miami, for example, that you will soon be able to own mycompany.berlin and myccompany.miami and so forth. All these generate new IP numbers which so far show no sign of giving out, despite the billions in use.

Sadly, Fry was a bit off the mark there. IP addresses are allocated globally by the Internet Assigned Numbers Authority, which does delegate to local registries, but new addresses are not created with domain names. There is a cavernous amount of space in IPv6 – but it will run out one day. Currently IPv6 uptake is slow and IPv4 space is running out.

Over at Microsoft, techies are apparently busily patching up Windows 8, but leaving Windows 7 users in the lurch. Security researchers reckon they’ve found a number of instances where security functions in Windows 8 have been updated, but not in Win7, leaving computers open to zero day vulnerabilities.

Moti Joseph, formerly of Websense, suggested that Microsoft may be leaving Windows 7 users in the cold to save time and money:

And finally, the prize for the most cringeworthy example of a person in authority attempting to be “cool” this week goes to UK Culture Secretary Sajid Javid, who fired off this cheesy line about how great it was that the first Star Wars standalone flick would also be filmed in Blighty:

Given Lucasfilm’s decision to film another Star Wars movie in the UK, it is clear that the Force is strong here. ®