A leaping-layout goalie save in orbit? Much less painful than Marcelo's 'own goal' 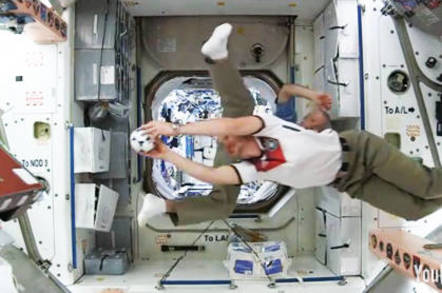 Video Unless you've been living on a deserted island for the past year or so, you know that the World Cup kicked off today with a match between Brazil and Croatia – and three crew members of the International Space Station have produced a video to celebrate the greatest team-sports event in the world over which they're orbiting.

NASA astronauts Reid Wiseman and Steve Swanson and ESA astronaut Alexander Gerst of Germany united to produce the video, but that unity might be strained a wee bit as their two teams vie to be one of the two that rise from Group G, aka the "Group of Death", which begins play on Monday, June 16 – as NASA notes, the US and Germany first meet on June 26 at Arena Pernambuco in Recife, Brazil.

Never one to miss a promotional opportunity, NASA has its own World Cup webpage, including a link to an aerodynamic study of the new Adidas Brazuca football, which they expect "will have a more predictable flight path at typical striking speeds" than the 2010 Cup's Jabulani.

The ISS: slightly wider than a football pitch (source: NASA – click to enlarge)

"The players should be happier with the new ball," predicts Rabi Mehta of NASA's Ames Research Center. "It is more stable in flight and will handle more like a traditional 32-panel ball."

We'll see – but we also believe that they may not be too happy when they no longer have an excuse for an opponent's scoring.

Oh, and as we click "Publish" on this story, Brazil's Neymar has alleviated Marcelo's own-goal grief somewhat by punching in his own goal – not his own "own goal" – in the 29th minute. ®