So, what exactly defines a 'boffin'? Speak your brains... 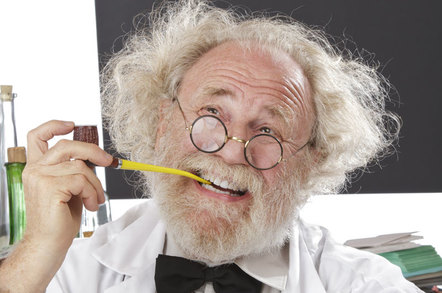 The recent protest by computer scientist Yossi Oren of Columbia University that he hadn't been hailed as a boffin here at El Reg prompted some lively debate at Vulture Central as what exactly defines the term.

Some of us, while conceding that scientists such as Oren are indeed clever chaps, felt that his area of expertise lacked certain prerequisites for boffinry, such as a white lab coat and, of course, a pipe.

History records that "boffin" was first used for the kind of people who developed radar, brewed up bouncing bombs or sat smoking their pipes while dreaming up mighter codebreaking machines.

Since then, the term has at times been deployed in a derogatory sense, but has of late been restored to its full glory as an affectionate name for an increasingly wider range of professions.

So, where's the limit? To determine the matter, we're inviting readers to suggest jobs worthy of the title "boffin", and those which most certainly aren't - despite generous journalists' elevation of these lesser beings to the illustrious ranks of boffinry.

When you've spoken your brains, we'll stick up a poll which will ask "Is an X a boffin? Yes/No" for each job. Once the results are in, we'll forward them to the scientists worldwide for guidance as to when it is and is not worthwhile protesting that they haven't been dubbed a "boffin".

So, stick the kettle on, light up a pipe, and give us your thoughts. ®