Free speech CAN be regulated, promise, says mighty warrior of the steppe 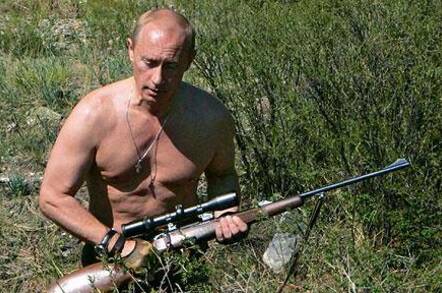 Russian president Vladimir Putin has told a startup forum that the country isn't trying to clamp down on Internet freedoms, but is merely focussed on child protection.

Reuters reports that Vlad has deployed the “think of the children” angle while trying to hose down fears that Moscow is tightening its grip on freedom of expression in Russia.

In defence of that, Putin says that while there's been plenty of debate about “restrictions on paedophilia, on the promotion of drugs, terrorism or advocating suicide … one should not introduce any restrictions on civil liberties and the free market.”

However, with rules requiring blogs that attract more than 3,000 hits a day* to be registered with Russia's communications and mass media ministry, and social media regulations requiring the on-shoring of data to servers within Russia, criticism is growing that the government has abandoned its formerly laissez-faire attitude to the Internet.

As blogger Anton Nossik writes in New Republic, since Putin's assertion in late April that the Internet is a CIA plot, the new laws passed also include the right to ban foreign content without explanation, while other legislation proposed in the Duma includes a 1,000 rouble fee to the government to register a Website.

Putin, says Reuters, has put the Internet at 8.5 per cent of the country's GDP, used a speech to a startups forum to try and hose down fears about the regulation push, saying “every day a third of our population uses the Internet and of course, there has to be some regulation”, but that the government doesn't want to stifle a “5 trillion roubles” business.

*Bootnote: Australian readers might compare 3,000 hits a day to the proposed but never acted-on Finklestein report into Australian media, which would have subjected blogs with just 15,000 hits a year to a regulatory mechanism. ®