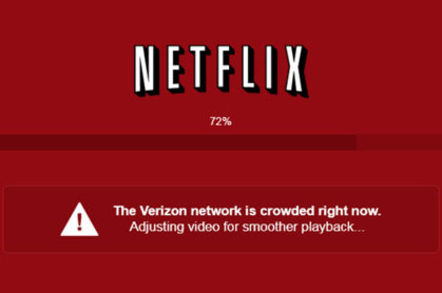 The telecom giant has sent a cease-and-desist letter to Netflix, demanding that the company stop sending its users notification messages that point the finger at Verizon when videos are slow to load. The messages, as posted below, tell users "The Verizon network is crowded right now."

Shortly after the above Tweet from Vox designer Yuri Victor was posted, media outlets began picking up and retweeting the news, prompting Verizon to shoot off the cease-and-desist letter to the Netflix legal office. Verizon provided El Reg with copy of the letter, excerpted below.

There is no basis for Netflix to assert that issues with respect to playback of any particular video session are attributable solely to the Verizon Network. As Netflix knows, there are many different factors that can affect traffic on the Internet, including choices by Netflix in how to connect to its customers and deliver content to them, interconnection between multiple networks, and consumer in-home issues such as in-home wiring, WiFi, and device settings and capabilities.

The letter goes on to claim that Netflix has opted to rely on a number of "middle-man networks" rather than agree to a direct connection deal with Verizon. Because of this, says Verizon, the streaming video provider has only itself to blame for poor traffic.

"To now accuse last-mile ISPs of being solely responsible for service issues that may relate to congestion on peering circuits stemming from network arbitrage by upstream providers is self-serving, deceptive and an unfair business practice," Verizon said.

Netflix, meanwhile, maintains that it has nothing to hide and that Verizon is indeed at fault for poor performance of the service on their network.

"This is about consumers not getting what they paid for from their broadband provider," a Netflix spokesman told El Reg.

"We are trying to provide more transparency, just like we do with the Netflix ISP Speed Index, and Verizon is trying to shut down that discussion," he said.

The spat comes even as the two companies are said to be preparing a direct-connect setup, which would in fact see Netflix establish a direct pipeline for the service with Verizon. The companies have not given any timetable for that process other than saying it would be complete "in the coming months." ®