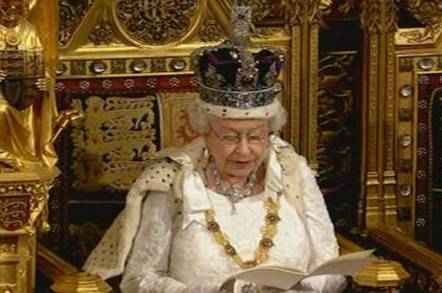 The final session of Parliament before next year's General Election was opened by the Queen today, who told MPs and peers that the Tory-led coalition government had 15 bills tabled.

There was little of note on the tech front, with two exceptions – both detailed within the Serious Crime Bill.

The first is that plans are afoot to "amend the Computer Misuse Act 1990 to ensure sentences for attacks on computer systems fully reflect the damage they cause"; the second is that the government will "create a new offence of possessing 'paedophilic manuals'."

At present, miscreants convicted under the Computer Misuse Act serve a maximum sentence of five years.

Labour MP Dennis Skinner, who seems to have a pantomime moment during the state opening every year, chided that the Queen's Speech today represented "the Coalition's last stand".

The government's full programme of law-making for the next year can be read here. ®