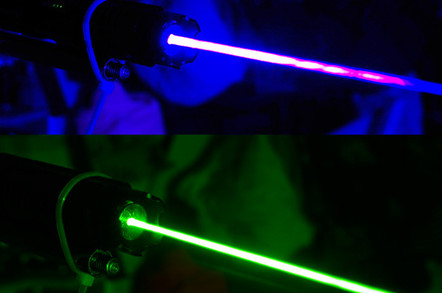 Vid The FBI has announced it is extending a trial campaign that offers a reward of up to $10,000 for information leading to the arrest of anyone indulging in "lasing" – the increasingly popular sport of zapping aircraft with lasers.

Back in February, the Bureau decided it had had enough of this "dangerous crime", which in 2013 resulted in 3,960 reported laser strikes against aircraft.

It explains: "When aimed at an aircraft, the powerful beam of light from a handheld laser can travel more than a mile and illuminate a cockpit, disorienting and temporarily blinding pilots.

"Those who have experienced such attacks have described them as the equivalent of a camera flash going off in a pitch black car at night. As of December 2013, the FAA had documented at least 35 incidents where pilots required medical attention after a laser strike."

The anti-anti-aircraft laser scheme launched in a dozen FBI field offices in areas of high lasing activity. "Since then, there has been a 19 per cent decrease in the number of reported incidents in the major metropolitan areas of those offices," the Feds report.

Accordingly, the campaign will now extend across the US. Federal air marshal George Johnson said: "We want to encourage people to come forward when they see someone committing this crime, which could have terrible consequences for pilots and their passengers."

To emphasise just how much hot water lasing can get you in, the FBI cites the case of the 26-year-old California man who back in March earned himself "14 years in prison for aiming a laser pointer at a police helicopter and a hospital emergency transport helicopter".

Sergio Rodriguez was convicted of targeting the choppers with "a high-powered green laser pointer". His girlfriend, 23-year-old Jennifer Coleman, was later sentenced to two years for her part in the crime. ®