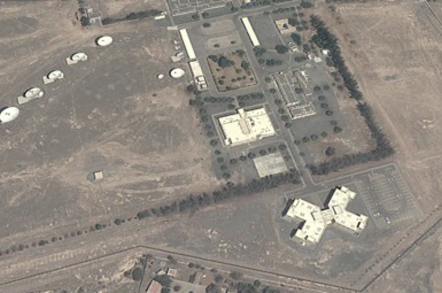 Exclusive Above-top-secret details of Britain’s covert surveillance programme - including the location of a clandestine British base tapping undersea cables in the Middle East - have so far remained secret, despite being leaked by fugitive NSA sysadmin Edward Snowden. Government pressure has meant that some media organisations, despite being in possession of these facts, have declined to reveal them. Today, however, the Register publishes them in full.

The secret British spy base is part of a programme codenamed “CIRCUIT” and also referred to as Overseas Processing Centre 1 (OPC-1). It is located at Seeb, on the northern coast of Oman, where it taps in to various undersea cables passing through the Strait of Hormuz into the Persian/Arabian Gulf. Seeb is one of a three site GCHQ network in Oman, at locations codenamed “TIMPANI”, “GUITAR” and “CLARINET”. TIMPANI, near the Strait of Hormuz, can monitor Iraqi communications. CLARINET, in the south of Oman, is strategically close to Yemen.

British national telco BT, referred to within GCHQ and the American NSA under the ultra-classified codename “REMEDY”, and Vodafone Cable (which owns the former Cable & Wireless company, aka “GERONTIC”) are the two top earners of secret GCHQ payments running into tens of millions of pounds annually.

The Seeb spy base. Not in your name? My dear boy, that's the whole point

The actual locations of such codenamed “access points” into the worldwide cable backbone are classified 3 levels above Top Secret and labelled “Strap 3”. The true identities of the companies hidden behind codenames such as “REMEDY”, “GERONTIC”, “STREETCAR” or “PINNAGE” are classified one level below this, at “Strap 2”.

After these details were withheld, the government opted not to move against the Guardian newspaper last year for publishing above-top-secret information at the lower level designated “Strap 1”. This included details of the billion-pound interception storage system, Project TEMPORA, which were revealed in 2013 and which have triggered Parliamentary enquiries in Britain and Europe, and cases at the European Court of Human Rights. The Guardian was forced to destroy hard drives of leaked information to prevent political embarrassment over extensive commercial arrangements with these and other telecommunications companies who have secretly agreed to tap their own and their customers’ or partners’ overseas cables for the intelligence agency GCHQ. Intelligence chiefs also wished to conceal the identities of countries helping GCHQ and its US partner the NSA by sharing information or providing facilities.

According to documents revealed by Edward Snowden to journalists including Glenn Greenwald among others, the intelligence agency annually pays selected companies tens of millions of pounds to run secret teams which install hidden connections which copy customers' data and messages to the spooks’ processing centres. The GCHQ-contracted companies also install optical fibre taps or “probes” into equipment belonging to other companies without their knowledge or consent. Within GCHQ, each company has a special section called a “Sensitive Relationship Team” or SRT.

Snowden’s leaks reveal that every time GCHQ wanted to tap a new international optical fibre cable, engineers from “REMEDY” (BT) would usually be called in to plan where the taps or “probe” would physically be connected to incoming optical fibre cables, and to agree how much BT should be paid. The spooks' secret UK access network feeds Internet data from more than 18 submarine cables coming into different parts of Britain either direct to GCHQ in Cheltenham or to its remote processing station at Bude in Cornwall.

Among the cables specifically identified in one document as currently being intercepted or “on cover” are an Irish connection, Hibernia Atlantic, landing in Southport, and three European connections landing at Yarmouth, Dover, and Brighton.

Next page: Sending anything via a cable that lands in Britain? Or a country where the current ruler was put in by the SAS, maybe?
Page:
Tips and corrections
360 Comments