SCIENCE explains why you LOVE the smell of BACON

Reaction between compounds found to ... you're already off to fry some bacon, aren't you? 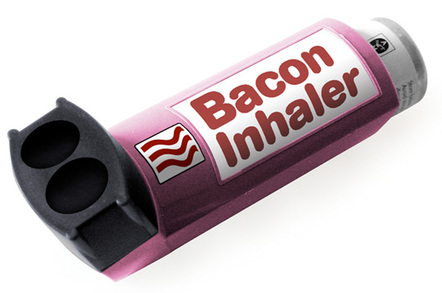 Scientists have explained the reason why humans love the smell of frying bacon.

Bacon-boffins from the American Chemical Society and Compound Interest produced a video summarizing a research effort into the compounds that give everyone's favorite cured breakfast meat its distinctive and wonderful aroma.

Video: The Smell of Bacon

The video explains that bacon's smell is the result of a process known as the Maillard Reaction, in which sugars break down and combine with amino acids to form any of 150 different organic compounds.

Among those compounds, researchers say, is a collection of aldehydes, hydrocarbons, and nitrogen-containing pyridines and pyrazines which humans (and most other carnivorous or omnivorous species) find so enticing. That collection of compounds is unique to bacon and is not produced when other types of pork are fried.

The groups reference a 2004 study by Spanish researchers which investigated and compared the smells produced by frying bacon and pork loin. The study concluded that the nitrites present in bacon were likely the reason it produced a preferable aroma to other pork products.

Unfortunately, the study did not address the English v. American bacon issue that has divided the Reg San Francisco office along international lines. Our Yank staff prefer the crisp and fatty American rendition, while the Brits maintain that their leaner, more chewy bacon is tops. ®

The ultimate full English breakfast – have your SAY

FTSE has a nap after a full English IT glitch

Have YOU had your breakfast pint? Boffins confirm cheeky daily tipple is good for you

Study of Americans shows light drinking is still better than none