Jade Rabbit nearly out of hop 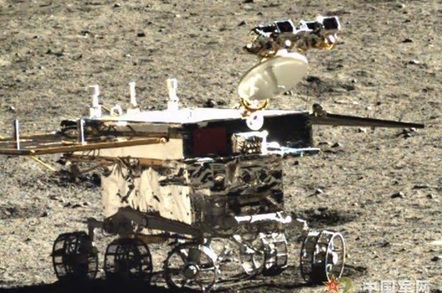 The Jade Rabbit (Yutu in Chinese) moon probe is pretty much on its last legs, according to reports emerging from China.

The spacecraft had surprised the country's space scientists in February by waking up in spite of an unspecified “mechanical control abnormality”.

Its initial behaviour in December had been encouraging: it rolled out and took a look around, before being put to sleep in the lunar night. In early February, things looked bleak. Operators had woken the rover successfully, but when its next shutdown was due, it failed to respond to commands.

According to Reuters, China's Xinhua newsagency says Jade Rabbit is still transmitting data via the Chang 3 probe that delivered it, but its wheels aren't functioning, and its solar panels aren't providing the insulation needed during the lunar nights.

The report quotes Li Bengzheng, deputy commander-in-chief of China's lunar programme, as saying the buggy is getting weaker "with each lunar night”.

Instead of seeking mineral resources and running geological surveys, Jade Rabbit is soon to become another fixed landmark for future (hypothetical) lunar tourists. ®