This has been real fun an' all, but it's time to end this 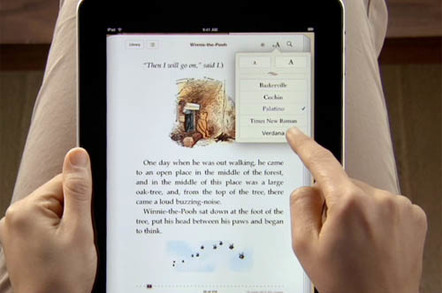 The US Department of Justice has urged an appeals court to uphold the verdict against Apple that found the fruity firm had violated antitrust laws and conspired with book publishers to fix the price of ebooks.

In paperwork submitted to the US court and seen by The Register, the DoJ claimed Apple’s appeal was just trying to pick apart a few bits of the argument put forward by it and by state attorneys general.

“The district court properly determined that Apple had participated in a horizontal conspiracy among competing publishers to fix ebook prices, which was per se illegal,” the department wrote.

“Apple’s efforts to dismember the conspiracy by attacking a few isolated pieces of evidence leave only the definite and firm conviction that no mistake was made; Apple 'was a knowing and active member of [the] conspiracy'. Even when facilitated by vertical contracts, or joined by a vertically related entity, an agreement among competitors to fix and raise prices is per se illegal. Apple orchestrated such an agreement and is liable for it.”

Apple is trying to get the Second Circuit Court of Appeals in New York City to overturn the ruling from federal district Judge Denise Cote, claiming that the verdict was not in the spirit of the Sherman Act, the US competition law intended to protect customers.

“The district court’s ruling that Apple, in the very act of launching the iPad, inventing the iBooks Store, and entering the ebooks market, violated the Sherman Act is a radical departure from modern antitrust law and policy,” the iPad maker argued in a court filing seen by The Reg.

“If allowed to stand, the ruling will stifle innovation, chill competition, and harm consumers. This court should overturn it.”

But the DoJ said the company’s actions couldn’t be seen as pro-competition, because ultimately ebook users ended up paying more than they did during Amazon’s climb to the top of the market.

“Apple contends that the horizontal price-fixing conspiracy was actually pro-competitive and therefore not per se unlawful,” the department’s filing said. “That argument ignores the overwhelming evidence that the conspiracy dramatically increased ebook prices, thereby harming consumers, without producing any countervailing pro-competitive benefits.”

Some of the world’s largest publishing houses are alleged to have colluded with Apple to fix the price of ebooks as a way of breaking what was fast becoming an Amazon monopoly in the digital tome market. The fact that the introduction of the iPad and its iBooks Store appeared to stop Amazon from complete dominance of the market has been portrayed as a good thing for competition in the industry.

But the DoJ and the 33 states that are also suing regarding the conspiracy point out that competition law is not there to protect rival businesses, but to protect consumers. They say that prices rose as a result of the move from traditional publishing contracts to agency contracts, which changed how the digital books were bought from publishers, and the most favoured nation (MFN) clause that stopped publishers offering better prices to retailers other than Apple.

All five publishers involved – Hachette, Harpercollins, Penguin, Macmillan and Simon & Schuster – settled the case before trial, but Apple refused to go quietly and is still fighting the case.

As well as being forced to renegotiate contracts, axe MFN clauses and put up with a court-appointed antitrust monitor, Apple is also facing a trial for damages that could see it out of pocket by up to $840m (£501m). ®