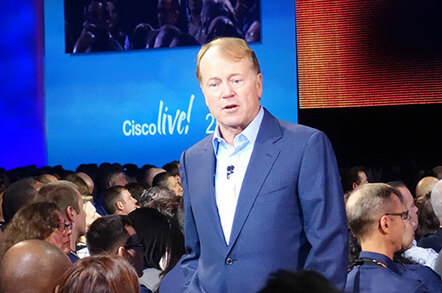 Update Paperwork filed with the Securities and Exchange Commission show that as Cisco's CEO was wandering around the Moscone Center keynote room delivering his annual address to the Cisco Live! Conference, his brokers were selling shares in the company hand over fist.

The timing for all this is very interesting. Traders usually keep a close eye on keynotes as they do affect stock prices, so it may be that Chambers was nervous about the market's reaction to his plan to remake Cisco as a firm that is about "outcomes and results," rather than mere products.

As it turns out, Cisco's stock rose by a few points shortly after Chambers made his stock sale, so the markets appeared to like what they are hearing. Chambers himself will also be smiling, since clearing around $25m in a day is always nice.

A Cisco spokesman has been in touch to say: "The sale of long shares and the stock option exercise and sale by John Chambers is based upon the pre-established criteria outlined in his 10b5-1 trading plan. The options were set to expire in September 2014. His 10b5-1 plan was adopted in December of 2012 on the recommendation of his financial advisors, as part of his individual long-term strategy for gradual asset diversification and liquidity."

Chambers, along with most Cisco executives, takes most of his executive compensation in the form of stock options. Last year his pay packet in cash was $5,800,000 but he also trousered stock options worth $15,237,652 to compensate him for the stress of running Cisco.

Chambers is still a significant stockholder in the company, but the deal does see his stake slightly reduced. After a series of lackluster financial quarters, his decision to divest a significant stock holding may be seen by some as a worrying sign.

Then again, maybe he just fancies buying a yacht or something – summer is on its way in California, and the sailing is very good this time of year. ®