ET hunter: We will find SPACE ALIENS in 20 years

Spacewatcher predicts major discoveries on the horizon ... should the funding be there 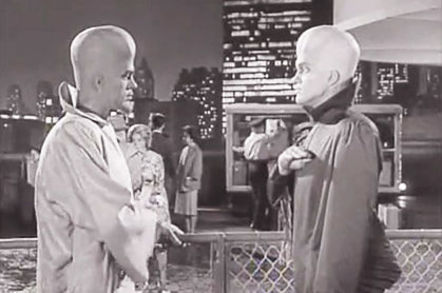 First contact between man and extraterrestial life may be imminent and set to take place within the next two decades, according to the top astronomer at the SETI Institute.

Testifying before the US House of Representatives committee on science, space, and technology, senior astronomer Seth Shostak predicted that life will soon be found in our own cosmic backyard, within the solar system itself.

"There are at least a half a dozen other worlds that might have life in our solar system," Dr. Shostak told the congressmembers.

"The chances of finding it I think are good, and if that happens I think it will happen in the next 20 years, depending on the financing."

The astronomer went on to explain that as new research suggests some 70 per cent of stars in our own galaxy have orbiting planets, and as many as one fifth of those likely include at least one Earth-like planet, odds overwhelmingly favor life.

"The numbers are so astounding that if this is the only planet that not only life but intelligent life has arisen, then we are extraordinarily exceptional," he explained.

"It is like buying trillions of lottery tickets and none of them is a winner; it would be very unusual."

Shostak noted that while efforts to explore nearby planets and moons are currently our best hope for discovering life outside of Earth, other potential avenues for discovery include systems such as the Kepler planet-hunting probe and Shostak's own SETI project, which monitors radio frequencies for possible signal broadcasts.

Given the systems in place, Shostak believes that discovery of exterrestrials will occur in our lifetimes, should governments provide scientists with the necessary funds.

"To find that there's life out there, intelligent life, would calibrate our position in the universe; it would probably be the greatest discovery that humankind could ever make," Shostak said.

"And what is important is that this is the first generation that has the knowledge and the technology to do that."

When provided with appropriate funding, of course. ®