Redmond slow to fix IE 8 zero day, says 'harden up' while U wait 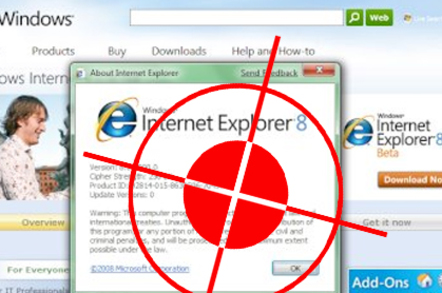 Microsoft has decided not to rush out a fix for an IE 8 zero-day first identified seven months ago, instead telling users to harden up their browsers.

Details were made public through HP's Zero Day Initiative vulnerability clearing house after Microsoft failed to patch its much-hacked platform.

Microsoft was notified two weeks ahead of today's disclosure and has been contacted by El Reg for comment.

"This vulnerability allows remote attackers to execute arbitrary code on vulnerable installations of Microsoft Internet Explorer. User interaction is required to exploit this vulnerability in that the target must visit a malicious page or open a malicious file," the disclosure read.

"An attacker who successfully exploited these vulnerabilities could gain the same user rights as the current user."

Users of Microsoft Outlook and Windows Mail were less likely to fall for a phish exploiting the zero day because the apps open emails in the script-blocking 'restricted sites zone'.

Instead of a patch, Redmond released work-arounds suggesting users harden IE 8 security by changing settings to block and alert use of ActiveX Controls and Active Scripting, and install its Enhanced Mitigation Experience Toolkit (EMET) which makes exploitation of Windows boxes more difficult and expensive.

The disclosure comes on the heels of attacks targeting Internet Explorer vulnerabilities discovered in April. ®