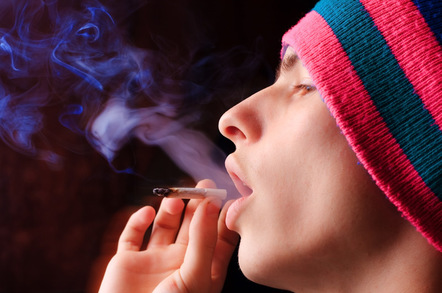 Apple has lifted its usual censorship firewall to allow a game simulation of a drug-pushing business called Weed Firm to shoot to number one in its App Store charts.

The sim-smoker app allows cosseted fanbois to imagine life as a herbal wholesaler. Players are invited to build contacts in the underworld, beef up their production line and punt ganja to a variety of ne'er-do-wells.

A stripper even offers the player a quick virtual lapdance in exchange for some cannabis, something we're sure pretty much never happens in the broadly male, rather wimpy world of the weed smoker.

Don't be scared of Weed Farm though, because the designers don't want you to get any ideas: "The creators of this game do not encourage the cultivation or use of cannabis. The plot of this game is solely a work of fiction and should be viewed only as such," its designers said.

Players who've offered reviews seem rather disappointed with the game, complaining that it's "boring" and that there isn't anything "interesting" to spend their money on.

"I found the whole idea of having an alien in the game very exciting until I actually unlocked it and it demanded all of my weed," one player wailed. "Customers are extremely repetitive and would be great if it had more. Instead of only growing/selling weed you could include more drugs such as cocaine and heroine. Also found the area very small and repetitive, with nothing to spend my money on most of the time. The lap dance is a great idea but actually it's really boring."

Way back in the day, Steve Jobs himself was known to have had the occasional toke (2012 FOI requests by Wired revealed) – although apparently the last time he partook was in 1977.

Meanwhile Apple is rumoured to be planning to hook up with apparent* weed advocate rapper Dr Dre. After a rumoured $3.2bn acquisition of his headphones company Beats, Apple is said to be mulling a senior role for the music firm's founder.

Dre's own firm appears to be based in Dublin after a move from Clonakilty in County Cork, Ireland, neither of which are far from Apple's own overseas base in the emerald isle.

Tax experts have suggested the fruity firm legally avoided $1bn off its overseas tax bill by setting up some of its ops there.

* Who can forget his collaboration with Snoop Dogg, "The Next Episode", which ends with the exhortation to "smoke weed every day" or "Kush" from his album Detox?