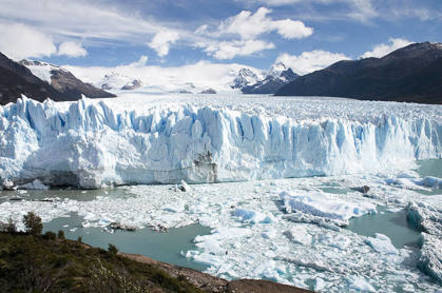 Scientists at NASA and the University of California, Irvine have concluded that the glaciers of West Antarctica are now in terminal decline and the resultant ice loss could raise global sea levels by up to four feet over the next few centuries.

"The collapse of this sector of West Antarctica appears to be unstoppable," said UC Irvine glaciologist Eric Rignot, who is also with NASA's Jet Propulsion Laboratory.

"The fact that the retreat is happening simultaneously over a large sector suggests it was triggered by a common cause, such as an increase in the amount of ocean heat beneath the floating parts of the glaciers. At this point, the end appears to be inevitable."

The research, published in the journal Geophysical Research Letters, examines 40 years of measurement data from the Western Antarctic and uses data from two European Remote Sensing satellites that have been measuring glacial changes between 1992 and 2011 with radar that maps surface movement to within a quarter of an inch.

In March, research by UC Irvine showed that the flow rate of Western Antarctic glaciers into the ocean has increased by 77 per cent from 1973 to 2013 and this, coupled with the latest research, suggests that the glaciers "have passed the point of no return."

"This sector will be a major contributor to sea level rise in the decades and centuries to come," Rignot said. "A conservative estimate is that it could take several centuries for all of the ice to flow into the sea."

He suggested that the amount of sea-level rise from these glaciers could be difficult for humans to cope with, but also that if these Western glaciers let go then this will accelerate ice loss from the rest of the continent. ®