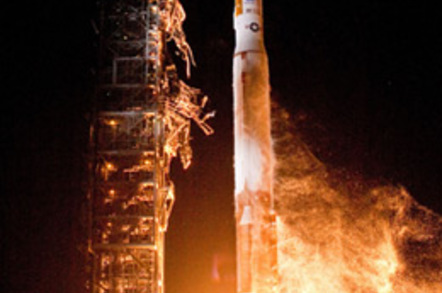 The Elon Musk-led upstart sought a court injunction against the purchase, and was granted a temporary banning order last week. But that was lifted yesterday after the judge was assured by Uncle Sam's officials that the sale didn't violate sanctions against Russia.

SpaceX went to the court of federal claims to secure a ban because, ultimately, it wants to smash United Launch Alliance (ULA)'s monopoly on the US government's black-funded spy satellite launches.

ULA, a joint venture between Lockheed Martin and Boeing, frequently lobs payloads of surveillance birds into orbit, and SpaceX wants some of that multibillion-dollar defence contract action. The upstart claims ULA won its most recent deal with the US Air Force, guaranteeing the purchase of 36 rocket cores for “national security launches”, without any competition from other providers.

Last week, Judge Susan Braden issued a temporary injunction against ULA on the strength of international sanctions against Russia over the conflict in Ukraine, but changed her mind on Thursday.

She said in a filing [PDF] that she had received letters from officials in the general counsel office of the US Department of Treasury, the Office of National Security and Technology Transfer Controls in the Department of Commerce, and the legal offices for the Department of State explaining that the ULA deal doesn’t violate sanctions.

SpaceX had said that since ULA’s Atlas 5 rockets, which are kerosene-fuelled like its own, used engines bought from Russian state-controlled company NPO Energomash, they were in conflict with the sanctions. The court issued its ban partially because Musk’s firm said Russian Deputy Prime Minister Dmitry Rogozin has a relationship with NPO and he’s named specifically on a US government Blocked Persons List.

But the State and Treasury departments said they needed to “make an affirmative determination” to trigger a block on a company, and they hadn’t made any determination about NPO.

“Therefore, to the best of our knowledge, purchases from and payments to NPO Energomash currently do not contravene [sanctions],” their letters said. “We will inform you promptly should this situation change.”

In a statement, ULA said SpaceX’s lawsuit was “self-serving and irresponsible”.

“We continue to hope that SpaceX will revisit its underlying lawsuit and the merits of its case.” ®