Oracle vs Google redux: Appeals court says APIs CAN TOO be copyrighted 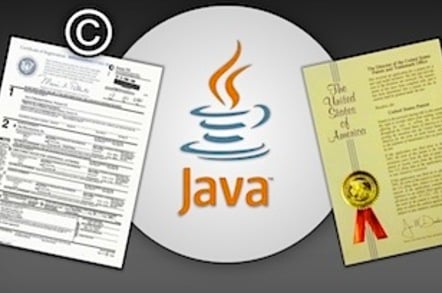 In a major victory for Oracle, a US Appeals Court has overturned an earlier ruling in the database giant's multibillion-dollar intellectual property lawsuit against Google, finding that Oracle's Java APIs are in fact covered by copyright.

In its original suit, filed waayyyy back in 2010, Oracle argued that Google had swiped portions of Java source code for use in its Android operating system, infringing on Oracle patents and copyrights.

A jury ultimately cleared Google on the patent-infringement charges but found that the Android source code did infringe on Oracle's copyrighted code. Yet that decision was effectively nullified when Judge William Alsup ruled that APIs like those found in Java are not eligible to be copyrighted.

Oracle appealed that ruling last February, and on Friday two judges of the US Appeals Court for the Federal Circuit issued an opinion in its favor.

"We are mindful that the application of copyright law in the computer context is often a difficult task," the opinion [PDF] reads, putting it mildly. "On this record, however, we find that the district court failed to distinguish between the threshold question of what is copyrightable – which presents a low bar – and the scope of conduct that constitutes infringing activity."

In other words, even though the amount of code that Google is accused of copying is minimal compared to the full scope of the Java source code, that doesn't mean what it did wasn't infringing.

As part of its suit, Oracle claimed that Google had explicitly copied an entire function called rangeCheck, which comprised just nine lines of code. Google argued during the trial that such a small amount of code was too negligible to constitute infringement, but the appeals court disagreed.

"To the extent Google is arguing that a certain minimum number of lines of code must be copied before a court can find infringement, that argument is without merit," Friday's opinion states.

Google had also submitted expert testimony to the effect that copyright is the wrong legal standard by which to judge software code, and that software should be patentable but not copyrightable. Here, however, the Appeals Court found that it was not within its authority to decide such matters.

"Until either the Supreme Court or Congress tells us otherwise, we are bound to respect the Ninth Circuit's decision to afford software programs protection under the copyright laws," the opinion says.

What led the judges to toss out the earlier finding, however, was their finding that Judge Alsup erred by focusing on Google's claims that Android is "interoperable" with Java and that copying Java code was necessary if Android was to be compatible with the Java language, which Google argued had become an industry standard:

Google cites no authority for its suggestion that copyrighted works lose protection when they become popular, and we have found none. In fact, the Ninth Circuit has rejected the argument that a work that later becomes the industry standard is uncopyrightable ... Google was free to develop its own API packages and to 'lobby' programmers to adopt them. Instead, it chose to copy Oracle’s declaring code and the SSO [structure, sequence, and organization] to capitalize on the preexisting community of programmers who were accustomed to using the Java API packages. That desire has nothing to do with copyrightability.

Having overturned Judge Alsup's ruling that the Java APIs aren't covered by copyright, the appeals court reinstated the jury's finding that Google did infringe Oracle's copyrights and that the infringement was not "de minimis" – that is, there was enough of it that it mattered.

But it's not over yet. Google argued during the original trial that its appropriation of the Java source code should be considered "fair use," an exception to copyright law that allows for use of copyrighted materials without permission in some limited circumstances.

If Google can make the case for fair use, it will dodge yet another bullet in its ongoing spat with Oracle. But you can bet Oracle would appeal any such ruling, too, so Google's lawyers should get ready for another long summer. ®