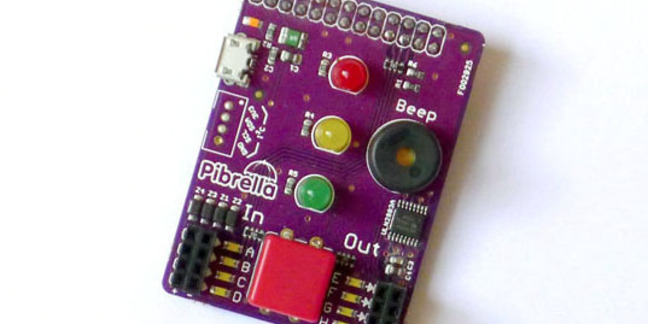 Review There is no shortage of clip-on boards designed for the Raspberry Pi, almost all designed to make the tiny computer’s GPIO pins more accessible in order to ease the connection of devices to it, particularly ones that operate at voltages that are not Pi friendly. 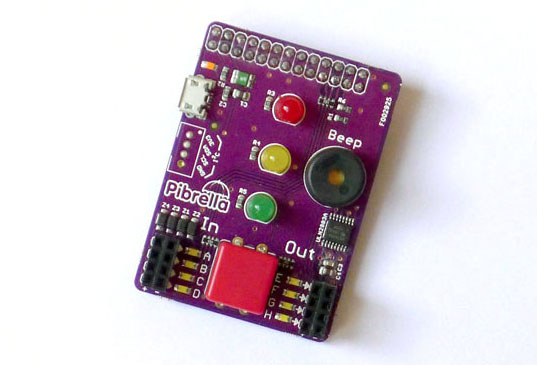 Jump to the beep: the Pibrella from Cyntech and Pimoroni

For instance, I have a PiFace Digital which provides screw-lock wire attachments, switches, LED indicators and relays. It’s downside, perhaps, is that it doesn’t provide the Pi’s GPIO with better connectivity so much as use the GPIO to deliver its own different set of inputs and outputs. So projects for raw Pis need a little extra thought before they’re implemented on a PiFace.

Yet this ‘embrace and extend’ approach is the one Pimoroni and Cyntech have taken with the Pibrella, one of the latest Raspberry Pi add-on boards. If the PiFace Digital is the BBC Micro Model B of the Pi add-on world – big, expensive, feature-packed but possible function overkill for most users – then the Pibrella is the Sinclair ZX81: cute, cheap, cheerful but rather more rudimentary.

What we have is a small, purple board with a buzzer, three LEDs bulbs – a traffic light set comprising one each of red, green and yellow – a button and eight IO ports with female connectors. Four of the ports are inputs, the rest outputs; all are connected to on-board surface-mound LEDs.

Compare that to the eight LEDs, two relays, four switches, eight digital inputs, eight open-collector outputs and seven jumper blocks of the PiFace Digital. The PiFace looks like a serious bit of electronics; the Pibrella looks like a toy. 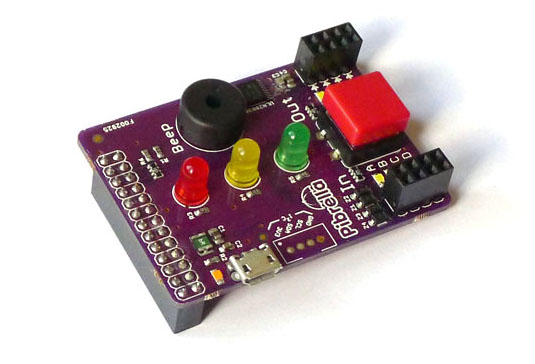 But it’s not entirely unsophisticated. For example, Pibrella has an I²C bus header, though it’s currently pin-less and not readily usable. The board also has a micro USB port for driving connected devices that need more power than the Pi can provide but which, handily, will also drive the Pi the board is connected to, through the GPIO.

All of the Pibrella's useable components are made accessible through a new Python library – just as PiFace’s are, incidentally – which neatly abstracts away all the Raspberry Pi GPIO stuff which you might otherwise need. This makes it very easy to target specific parts of the Pibrella, clearly and unambiguously.

The IO pins are all clearly labelled A through H, and this is how you address them in code, with no need to worry about pin numbering – pin location or chip GPIO assignments, all of which are different on the Pi itself – or which version of the Pi you have. 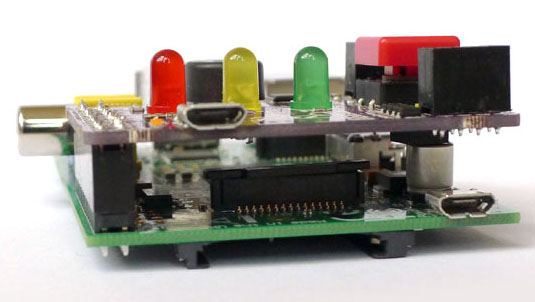 The buzzer comes with a couple of pre-defined tones, set in the library. To me, they didn’t sound very different from each other or that appealing either. It reminds me of the crude noise maker that came with the electronics kit I got for Christmas 1981. A true tone generator it ain’t.

Next page: The main event
Page:
Tips and corrections
14 Comments