Yaarrgh! LOOK OUT! UK set to be BURIED under MOUNTAIN of TABLETS 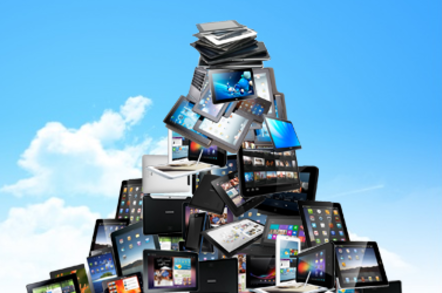 Retailers and distributors are buried under a "consumer mountain" of fondleslabs with the major channel-cramming culprit – according to our sources – a certain large South Korean vendor whose name begins with an S.

According to current stats from Stock In The Channel, a web-based tool that provides live data feeds from distributors, there are approximately 300,000 Samsung Galaxy boxes sat on warehouse shelves in Blighty.

It seems Samsung has reacted to the post-Chrimbo sales slowdown by, er, not reacting. According to our sources, it is continuing to press channel partners to take more stock, reminding us of an inventory strategy that served Acer well until demand for netbook and low-cost notebooks collapsed in late 2010.

In an ideal world, distributors don't want to store more than four to eight weeks' worth of stock, but current levels are tracking upwards of 12 weeks, said multiple sources who asked to remain anonymous.

"Demand is suppressed," claimed one channel source. "It is the wrong season and B2B sales are not helping to clear a consumer mountain."

Tab sales to businesses are not expected to account for more than a fifth of the entire market until 2018 - currently they represent low single-digit percentages.

Retailers don't like to have more than a fortnight worth of stock sitting in dark rooms, and are ordering more cautiously based on recent forecasts. Distributors were keen to "take a punt" on tabs but are "regretting it now", said another source.

General managers at Sammy are under pressure to hit targets and are looking at alternative outlets to clear stock, which include trying to cut price-aggressive deals with large supermarkets and brokers, fuelling the grey market.

This has a destabilising affect on official channels, which are then faced with batches of cheaper product moving from one part of the European Economic Environment to another, or often sometimes from outside the EEA.

"It is hard to keep track of the offers," a broker contact told us. "There is so much product out there that it is difficult to tell where it is coming from. Samsung has so many models. It still has 2013 product out there. It's a lot of mess - there are no controls".

Arch-rival Apple appears to have been relatively more cautious in its outlook, with CEO Tim Cook claiming in a Q2 earnings call with analysts that Cupertino had lowered inventory to balance supply and demand, keeping stocks in the "four- to six-week" range in distribution.

Market stats from IDC show that globally, tab sales into the channel grew just 3.9 per cent to 50.4 million in Q1, indicating some distributors are resisting attempts by Samsung and others to book in more stock. This was a decline of nearly 36 per cent on Q4.

IDC said the slowdown was felt across all operating systems and screen sizes and "points to an even more challenging year ahead for the category".

So there may not be a better time to haggle hard with tab suppliers, whether that be a distributor or a retailer.

We asked Samsung for comment on Friday 2 May and will update if and when we hear back. ®