And a third simply don't bother with secured networks at all 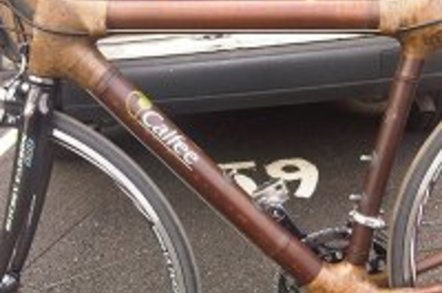 Wireless security across London remains flaky despite the well-known risks, according to an infosec bod who has been riding his bike all around town identifying insecure wireless networks and highlighting shoddy user behaviours that could be exploited by rogue hackers.

James Lyne, global head of security research at Sophos, went “warbiking” across the streets of the British capital over the course of two days.

Lyne used a little Raspberry Pi running Linux in the bag slung under the crossbar, a powerful battery under the seat to provide power for the scanning rig for a whole day, a small GPS unit, and a scanner aerial strapped to the downtube.

Lyne’s exercise revealed that among the more than 81,000 networks surveyed, some 29.5 per cent were using either the insecure Wired Equivalent Privacy (WEP) algorithm, or no security encryption at all.

A further 52 per cent of networks were using Wi-Fi Protected Access (WPA), a security algorithm that is past its sell-by date and can no longer be trusted as secure, he said. Everyone should have moved over to WPA2, which has been around for years, but the Sophos experiment provides clear evidence that this has only happened in a minority of cases.

The second phase of the Sophos experiment involved creating a free-to-use Wi-Fi network and seeing how many consumers would use it. Backhaul was provided using a 4G modem connection.

Hackers could use the same technology to create rogue access points in attempts to sniff traffic and capture user login credentials or passwords. Untrusted networks can, however, be used safely providing consumers are using VPN technology at the time – but Sophos found only one in 50 (two per cent) took this precaution.

“Our experiment found a disturbingly large number of people willing to connect to an open wireless network we created, without any idea of who owned it or whether it was trustworthy” Lyne explained.

“Our test was conducted strictly within the confines of the law but the cyber criminals won't have the same concerns, so our experiment shows why people need to be much more aware of the potential dangers of connecting to open Wi-Fi networks when they are out and about,” he added.

London was the latest stop on the “World of Warbiking” tour - a global research project targeting major cities across the globe. Previous legs of the tour included a cycle tour around San Francisco.

Warbiking is essentially war driving but using a bicycle instead of a car. Lyne and his computer-equipped bicycle went onto the streets of London to test how safe consumers and businesses might be from cyber criminals.

"Incredibly, conventional wireless network security is still a major concern, despite the security industry assuming such issues had been resolved years ago," according to Lyne. "Many would assume these methods are ‘old hat’ but it is still a very viable attack vector that demonstrates basic security best practice is not being adopted."

“Even within the security industry there are myths and misunderstanding about what the real risks are with wireless. Many argue that the unencrypted, intentionally open networks are ‘OK’ as they use a captive portal to register users. Unfortunately the standard user doesn’t recognise that major brand XYZ wireless is not encrypted and that their information can be picked up by anyone with a £30 piece of equipment available on Amazon,” Lyne concluded.

Lyne revealed the results of the "Warbiking" London experiment at this week's Infosecurity Europe tradeshow. Details about the methodology used and results so far from the "World of Warbiking" project - along with tips on how to be more secure – are available here.

The London exercise in late April revealed worse security practices amongst consumers in the UK than those seen in tech-savvy San Francisco. Only two per cent used a VPN in London compared to six per cent in San Francisco. In addition, the websites accessed by user in the UK contained more sensitive data (e.g. online banking credentials etc.)

The warbiking world tour is due to continue on to Las Vegas in the next few weeks, will move on to Hanoi, Vietnam, later in May, before arriving down under in Sydney, Australia in July. ®