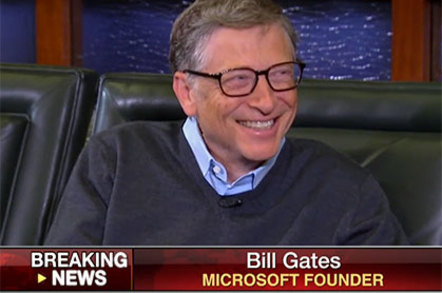 Microsoft cofounder and board member Bill Gates says he's leery of unloading the company's historically loss-making Bing division, but he wouldn't necessarily be opposed to spinning off Xbox.

Gates made the comments in an interview with Fox Business on Monday alongside mega-investor and Berkshire Hathaway CEO Warren Buffett.

Asked whether he would support new CEO Satya Nadella if he wanted to launch the Xbox business as its own company, Gates responded with "absolutely," though he cautioned that such a move might not be as good an idea as some pundits believe.

"We're taking PC gaming – Windows gaming and Xbox gaming – and bringing those a lot closer together. The power of the PC graphics chips mean you can do great games there," Gates said. He added, "We are going to have an overall gaming strategy, so it's not as obvious as you might think."

Gates observed that Microsoft has done some spinoffs in the past – including Expedia and the Slate online magazine, which both began life within Redmond – so the idea of splitting off pieces of the company is not without precedent.

Asked whether it might be time to cut Bing loose, however, the multibillionaire philanthropist appeared more skeptical, saying the poor-performing division had already delivered non-financial returns to Microsoft.

"Certainly the Bing technology has been the key to us learning how to do large-scale data centers," Gates said. "And Bing lets us see what's going on on the internet, so that as people are interested in various topics, we know what's new, we know when they're typing text what it might mean. So I see that as a pretty fundamental technology for the company – even for its Office business, which is a very, very core business."

Describing the technologies that go into Bing as part of Microsoft's "basic research," Gates said, "I can't see that making sense, to break it off."

Turning to Microsoft's line of Surface tablets – another historically unprofitable venture – Gates said Microsoft was seeing gains in sales of the higher-end Surface Pro, which has higher margins. Still, he cautioned not to expect devices to be a big breadwinner for the company.

"The hardware business, you're never going to have the kind of profitability you have in the pure software business," Gates said. "And so understanding where our cogs are going, both for the hardware and these big data centers we're building, analysts and investors are going to have to watch that a lot more carefully than they did when we were just a pure licensing company." ®