BBC hacks – tweet the crap out of the news, cries tech-dazzled Trust 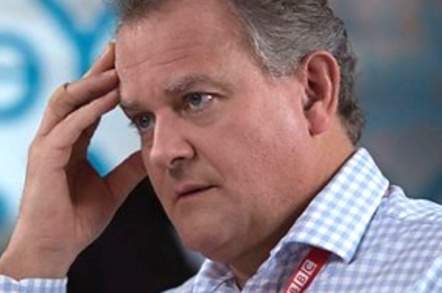 BBC News reporters should tweet more and use bigger and shinier infographics to bridge the gulf between the corporation and its audience, a W1A-ish report from the BBC Trust recommends.

The report, titled “Getting the best out of the BBC for licence fee payers: BBC Trust Review, BBC Network News and Current Affairs”, reveals a startling lack of engagement with the broadcaster's news output.

Only a third of TV news viewers watch more than an hour of BBC TV news a week. More than half of the audience for the main TV news bulletin (News at Ten) watches just once a week, while fewer than four per cent watch it every night.

Once the BBC was un-ignorable, whatever age you might be. Today, half of under-25s and two thirds of under-20s ignore it completely. And even online, apathy reigns: the corporation's digital share has increased from only 24 per cent of adults in 2012 to 26 per cent today.

But is using Twitter the answer? The report is quite sure that it is - but doesn't really explain why.

"We want to encourage the BBC to make more consistent use of third party sites to deliver content to a broader audience", it the report recommends. "One key objective of this will be to increase direct connection between individual BBC journalists and those who follow them, breaking down any perception of the BBC as speaking at audiences rather than listening to them."

Another answer to bridging the producer/audience divide is going to be big and shiny. Under the subheading “visualisation” we find some Infographic Envy:

"Other providers are considered better at routinely using ‘news graphics’ and integrating audio/video content into stories to illustrate and enhance news content," it finds.

"So that's all good then" - as the BBC's (fictional) Director of Values, Ian Fletcher, might say.

If Twitter's the answer, what was the question?

But one avenue is not explored - and it's rather conspicuous by its absence. BBC News might be being ignored because the preoccupations of the BBC editors and producers have little relevance to the audience - since it's a small subset of the middle class talking to itself.

For example, middle class parents fret that their darlings aren't being taught HTML at school, a religious mania at the BBC today; working class parents fret they aren't being taught to read or write. A handful of middle class voters fret about fracking because it's an abundant and cheap fossil fuel, and BBC News producers reflect those anxieties. Working class voters want cheaper fuel bills, since fuel bills are a larger proportion of their spending. Middle class media executives also tend to fret about “inequality” rather than relative wealth or social mobility. They also fret about "privatisation" of the NHS - rather than the prospect of dying a miserable and unnecessary death in an NHS facility*. You get the picture.

Little wonder then that the middle class find the BBC a bargain - their prejudices and tastes are "super-served" by the corporation today, while their consumption is subsidised by the poorer socio-economic groups who get their news elsewhere.

No amount of infographics or "tweeting the shit out of the news"** is going to change that. Here we find the BBC Trust looking to technology as its salvation, hoping it will fix something that technology won't really fix. Casting the net wider than Oxbridge, and reflecting a wider plurality of views might.

If the BBC reflects “the Establishment” – and it's fair to say it always has – then this is an Establishment that truly can't look itself in the mirror.

* Perhaps because for a lucky few, they can buy their way out of such a fate. The BBC's generic recruitment page - here - includes dental insurance, critical illness insurance and private medical insurance amongst the perks. Just sayin'.

** If a story is a compelling one, reflecting people's experience, then won't a "social media audience" be drawn to it anyway? Building up reporters as ersatz online "celebrities" is rather patronising.