Just the tip of the 'pirate-berg' in the Middle Kingdom 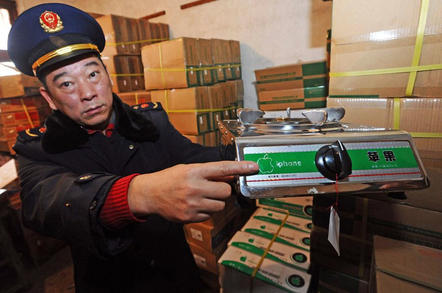 Chinese customs cops claim to have confiscated a whopping 76 million items thought to have broken copyright laws last year, many of them electronics, highlighting the persistent problems associated with IPR in the Middle Kingdom.

Some 98 per cent of the goods – accounted for in 20,464 batches – violated trademark rights, the General Administration of Customs told state-run Xinhua.

Electronics, digital storage devices and communications equipment all featured in much greater volumes compared to the previous year, although the authorities apparently weren’t prepared to put a figure on the rise.

They were able to reveal, however, that the market in knocked-off pharmaceuticals is also booming, with customs confiscating 673,000 pills last year – an increase of 570 per cent.

While such pronouncements are made by Beijing to prove that it’s getting tough on IPR enforcement, they actually serve more to highlight the sheer scale of the problem.

What’s more, almost all of the items captured by the authorities (99.4 per cent) were apparently done so as they were being exported – which still leaves a huge domestic black market to account for.

Walk down any major shopping street in a Chinese town or city and it’s pretty obvious that the 76 million figure is just the tip of the pirate-berg.

This isn’t to say that Beijing isn’t keen to change China’s image as a major offender in the global piracy stakes.

Both on-and offline it has been trying to make amends.

In 2013, 60,000 people were arrested on suspicion of copyright abuses and more than 90 million tonnes of pirated goods were confiscated.

In August last year Chinese customs officials joined forces with their US counterparts in a “intellectual property rights (IPR) enforcement operation”, which resulted in the seizure of 243,000 counterfeit consumer electronics goods – a first for the two nations. ®