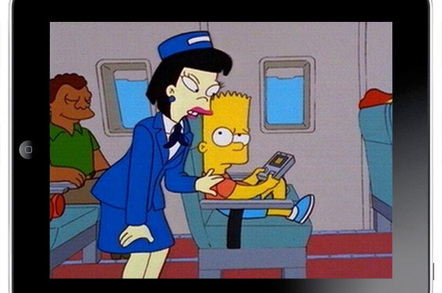 AT&T has one of the largest LTE networks in the US, and it has now signed an agreement with Honeywell to use the cellular grid to bring faster in-flight internet to air passengers.

"Everyone wants access to high-speed, reliable mobile Internet wherever they are, including at 35,000 feet," said John Stankey, chief strategy officer at AT&T. "We believe this will enable airlines and passengers to benefit from reliable high speeds and a better experience. We expect this service to transform connectivity in the aviation industry – we are truly mobilizing the sky."

In-flight internet is nothing new – Gogo has been beaming data back and forth between aircraft in the US for six years now from a network of around 300 cellular towers dotted across the US. But AT&T has many, many more cell towers than that, and the company reckons it can offer a faster and more reliable connection than its chief airline rival.

Suitably equipped aircraft would use an antenna to pick up signals from AT&T cellular towers during a flight, and that bandwidth would then be processed by Honeywell's hardware and used in-flight.

Gogo has been upping its bandwidth and now has an aircraft-to-satellite linkup system as well, but AT&T's LTE network could provide a much faster service. Other operators are also expected to get into the game now that the Federal Communications Commission wants to make extra wireless spectrum available for airborne data.

AT&T is partnering with Honeywell to run its in-flight service. As with the Gogo system, data will be streamed up to aircraft antennas and then Honeywell will provide the backend so that passengers can catch up on the latest Grumpy Cat pictures.

"We're not just servicing the passengers however," Jack Jacobs, Honeywell's VP of safety and information management systems told The Reg.

"It's also servicing the crew with updated charts and maps, updated weather information, and sending data for operations and maintenance departments on the aircraft itself. Our vision is a connected aircraft, where every aircraft essentially becomes an internet node and you can tie this across a fleet of aircraft around the world."

For airline passengers, getting faster internet is no bad thing, and with a bit of competition, Gogo might be forced to lower its rather expensive charges. Then again, this is AT&T we're talking about – it isn’t exactly known for its low, low prices.

One area of concern for many who fly regularly is the possibility of allowing mobile voice calls as well as data connections on aircraft. Gogo offers a text-in-the-sky smartphone app, but no-one's touching voice calls as yet.

"This technology should allow for voice calls as well as data, but that's up to the airlines," Jacobs said. "It's not a technology challenge at this point, but a policy challenge."

Which is a polite way of saying airlines have to find a way of avoiding other passengers beating someone to death with their shoes when they start bellowing onto their phones about their next huge business deal. If the number of such calls endured by ground-based public transport users is anything to go by, airlines may be loathe to risk it and we may enjoy peaceful skies for a while longer. ®

As losses narrow, nbn™ says business will drive growth in ARPU (that'll be how much it extracts from each punter)

He just smiled and gave me... er, a copy of the Ts and Cs

Of course it was a mistake, but the apology to 'buyers' included a 20% discount code