Stop us if you've heard this one before: Apple set to sue Android vendor 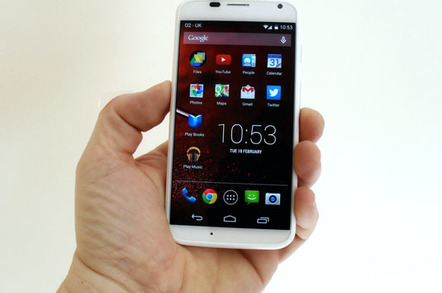 A US Federal Court has issued a ruling that will allow Apple and Motorola Mobility to assert certain patent claims against each other. The ruling also opens the door for Cupertino to try to seek a ban on sales of certain Android handsets.

While Google will be allowed to seek damages on any of the Motorola Mobility patents in question should they be found to be infringed, it will not be able to stop any sales of handsets that use the IP. This is linked to an earlier Moto pledge to license its “standards-essential” patents on reasonable terms.

The Federal Circuit Court of Appeals on Friday overturned (PDF) parts of a decision from a US Circuit Court judge which had prevented the two companies from engaging in a courtroom battle over allegations of infringement.

The appeals court ruling puts three of Apple's patents and three of Moto's back into play.

Since the case began, Motorola found itself sold off twice, first to Google then later to Lenovo in a pair of multi-billion dollar deals.

The case was preparing to go to trial in 2012 when, in what some would argue to be a show of mercy, Judge Richard Posner struck down the entire case and dismissed both claims.

"Neither [party] has shown that damages would not be an adequate remedy … the parties have failed to present enough evidence to create a triable issue,” Posner said at the time.

The appeals court, however, did not agree with Posner and in an opinion published Friday allowed the matter to head back to court. The ruling overturns several findings and decisions which Posner had cited in claiming that neither side would be able to seek damages.

As a result, the two firms will be able to return to court and argue some of the claims and counterclaims in the matter.

The decision also affects Apple's other major patent case in the US – with Samsung. One of the three Apple patents from the Moto-Apple case is also being asserted in this one – and is hence back in play. Although Sammy and Apple's lawyers had been set to start closing arguments today, thanks to this new appeals court ruling, US district judge Lucy Koh has said that additional arguments related to Apple's "data-tapping" patent (5,946,647) can be presented. This means the whole process will be dragged out for even longer. ®