Joe Hockey caught in his own .Net with Centrelink IT criticism

A tale of SOAP, unemployed alcoholic single mothers and policy in the doldrums 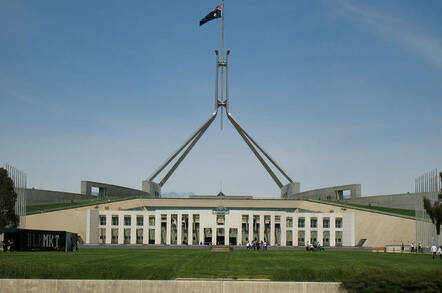 Australia's treasurer Joe Hockey last week told radio 3AW that IT at Centrelink, Australia's social security payments agency, is in such poor repair that at least a billion dollars is required to get it working well enough to enact desired reforms. Human Services minister Marise Payne confirmed the parlous state of affairs.

As is his wont, Hockey is blaming the problem on the previous government. As is also his wont, he's being a bit naughty: as this March 2004 press release shows, the government of which he was a member in 2004 signed off on a 10-year contract for Centrelink's database - the venerable Model 204 - and predicted the software would suffice until 2014.

To further highlight his revisionism, Hockey became minister for human services a few months after the press release was issued and therefore took responsibility for Centrelink. Hockey held the portfolio between October 2004 and January 2007, so had 27 months in which he could have addressed the issue.

But the story goes deeper than that, too. Because as early as 2001 Centrelink's ability to enable policy innovation by linking to the rest of the government was under active consideration.

I know this because in that year I was working as a corporate writer and a client asked me to interview an extremely senior Australian bureaucrat who explained to me how SOAP can help unemployed alcoholic single mothers.

He wasn't talking the SOAP you use in the shower: this bureaucrat was excited about Simple Object Access Protocol because he reckoned it would help him link outsourced third-party job placement service providers to his department's systems and to core Centrelink systems that handled payment of unemployment benefits.

Building those links was important to deliver a policy goal of outsourcing job-finding services for the unemployed. Australia's government used to deliver that service itself through the Commonwealth Employment Service. Government policy of the day instead decided that the private sector was a more appropriate source of job-finding services. Monitoring such suppliers' efforts created a need for integration between job-finding services suppliers' systems, those of a federal department and ultimately Centrelink's because if job-seekers weren't doing the right thing their payments could be suspended. In 2001, XML Web Services enabled by SOAP and Microsoft's .Net were just starting to emerge and fitted the bill nicely.

But the bureaucrat I interviewed had bigger plans. If it was possible to link systems between a gaggle of employment service providers and Centrelink, he reckoned, it would also be possible to build better links between all sorts of agencies.

To understand why this was a good idea, he asked me to consider the services needed by an hypothetical unemployed alcoholic single mother. Such a person, he explained, needs income support, training and health services. But if Centrelink were not aware of this person's health problems and training commitments, being flagged by employment services providers as non-compliant could mean having income support payments reduced or withheld. At that point, the woman's child would likely suffer because the household would have less money for food, school materials and so on. That child, the bureaucrat reckoned, would then have a higher chance of landing in cyclical poverty, which over decades would mean she cost the government a lot more than it had docked her mum for doing one job interview too few.

The bureaucrat imagined SOAP could help Australia's government to create a single case file for a hypothetical unemployed alcoholic single mother so that decision-making could be more nuanced, instead of each agency working in isolation and imposing its own rules.

The bureaucrat was later shuffled off to another agency so I am pretty sure he never realised his vision, not least because by 2010 I learned Centrelink went shopping for a WiFi network. The presence of WiFi in Centrelink offices was desirable, in part, so that “Staff from other Government agencies will also be able to use the wireless service to connect to their own systems from within the Centrelink office and work more flexibly with Centrelink staff to help shared customers.” Which sounds like workers from different agencies sitting around a table looking at their own file about a person, rather than a single case file.

But I digress: let's get back to the unemployed alcoholic single mother, because by 2011 helping her out had become a job for the new Department of Social Inclusion. That department became notorious when, after one of the many reshuffles in the chaotic Rudd/Gillard years, the new minister for the portfolio was unable to describe social inclusion and the role of the department.

Murdoch vessel The Australian feasted on that clanger. The minister, Mark Butler, eventually explained the Department's role and the notion of social inclusion in that organ, using the following language:

“Australians living with complex disadvantage interact with several government agencies and non-government organisations delivering government funded services. Traditionally, those agencies have stuck rigidly to their area of responsibility (such as income support or housing). This 'silo' approach by government means that individuals end up having to tell their story over and over again. Worse, one arm of government rarely knows what the other is doing, which can result in duplication, gaps or, sometimes, serious mistakes.”

When I read that, it immediately reminded me of the bureaucrat's words from years earlier.

The Department of Social Inclusion has since been abolished: Australia's current government thinks it was silly.

But the ideas Butler expressed above are not dead. As reported here, Australia's new social services minister Kevin Andrews recently visited New Zealand to learn how its runs welfare. One of the things he was reportedly impressed by is how “... the neighbouring welfare system … 'invests' in people before they become entrenched on welfare.”

As reported in these very pages, some of New Zealand's efforts involve sharing data among government agencies so that services for at-risk people can be offered targeted assistance, instead of made to conform to the rules of one agency.

Which brings us back to Hockey's complaint, because if Australia is not in a position to implement such policies a government of which he was a member and a department he oversaw for three years are partly to blame.

Yes, more could doubtless have been done during the Rudd/Gillard years of 2007-2013. But as my experience with the senior bureaucrat shows, Centrelink's IT and ability to enable innovation was under consideration in 2001.

Indeed, the idea of greater interoperability among government agencies has been alive for over a decade now, with seemingly little action to make it happen and a ministerial trip to New Zealand required to give it impetus.

Thus are we governed. By both sides of politics in Australia. ®

Golden Gate Capital jettisons equity before IPO can kick in

ERP disaster zone: The mostly costly failures of the past decade