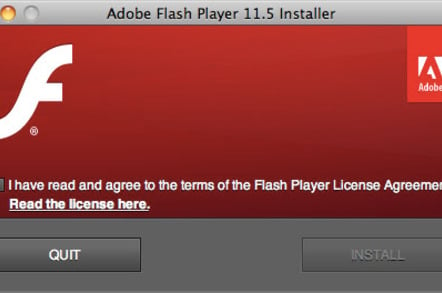 Adobe is pushing out a cross-platform security fix for a bug in its Flash Player that miscreants are already exploiting.

Windows users running Adobe Flash Player 13.0.0.182 and earlier need to update it following the discovery of a zero-day attack.

"Adobe is aware of reports that an exploit for CVE-2014-0515 exists in the wild, and is being used to target Flash Player users on the Windows platform," the software maker warned.

Bundled versions of Flash that come with Google Chrome and IE 10 and 11 also need to be updated for similar reasons, as explained in a security bulletin here.

An associated blog entry from Adobe is available here.

Adobe credits Alexander Polyakov of Kaspersky Lab for reporting the Flash Player on Windows problem and subsequently working with its security gnomes in helping to resolve the problem.

The Flash player announcements flows hot on the heels of the discovery of an even more serious security problem in Internet Explorer, which prompted a warning from US CERT. ®