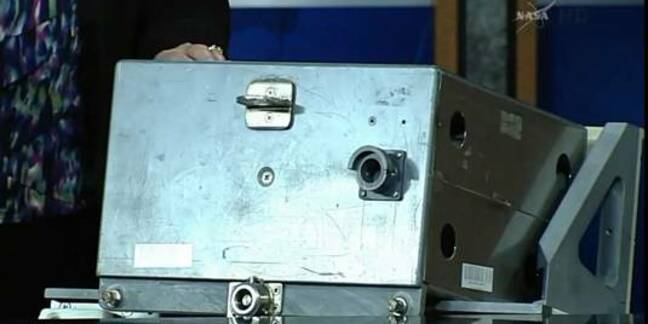 Two astronauts aboard the International Space Station have taken a wander over the outside of the station to replace a critical backup computer that conked out. 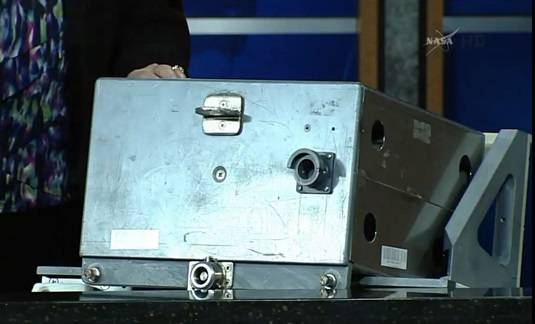 Flight engineers Rick Mastracchio and Steve Swanson swapped out the multiplexer/demultiplexer (MDM) control box in a 90 minute space walk along the side of the ISS. The computer is the backup controller for the station's robotic arm, solar panel controls, and railway system* and failed on April 11 during testing.

The microwave oven-sized grey control box is designed to be switched out easily, given a working environment that makes most Earthbound data centers look pleasant. The MDM has seven four-pin connectors on its base and is fixed with three retaining bolts, so the team simply slid the old one out and replaced it with a spare unit.

After completing the switchover, the unit was tested by crew inside the ISS to make sure all functions were normal. Meanwhile, Mastracchio trimmed a sheet of thermal shielding to protect the unit against heat stress as it moves in and out of sunlight.

"Nice and clean. Great job," Mission control's Jeremy Hansen told the crew after they completed the job in less than half the time allotted.

Although the main external MDM is still working fine, NASA believes in having backup systems ready at all times. The ISS has nearly 50 of the boxes spotted around the station, each handling critical systems, with primary control boxes having between two and four backup MDMs ready to take over.

The spacewalk was made possible thanks to equipment delivered to the ISS by SpaceX's Dragon capsule on Easter Sunday. The 5,000 pounds of cargo delivered included a replacement top half of one of the space suits needed to survive outside of the space station, and replacement parts for the rest, including new cooling units.

Last year, European Space Agency astronaut Luca Parmitano nearly drowned on a spacewalk after his suit's cooling system started venting coolant into his helmet. Just to be on the safe side, both Mastracchio and Swanson both wore helmets padded with absorbent material and with snorkels built in to allow for extra breathing time if problems should reoccur, Reuters reports.

The Dragon capsule is still being unloaded, but NASA also took the time on Wednesday to incinerate some trash using another service module. The Russian ISS Progress 54 cargo ship was loaded up with waste from the station and deorbited on Wednesday morning, eventually burning up over the Pacific Ocean just over an hour later.

* Yes, a railway. NASA calls it the Mobile Transporter (MT) and claims it's both the slowest and fastest railway in existence.

The MT runs 278 feet along the side of the space station and carries the 58 foot Canadarm 2 manipulator used to catch and berth incoming supply capsules and to perform heavy lifting on the outside of the ISS.

With a maximum speed of one inch per second, the MT can be considered the slowest railway system in the world, but NASA claims it's also the fastest, since the system is flying around the planet at 17,500 miles per hour. ®

Roundup Meanwhile: the UK government is going to clear everything up. Or at least keep an eye on it