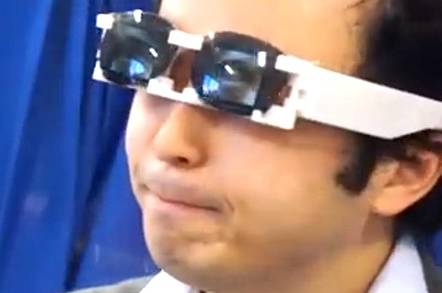 Vid A Japanese boffin has unveiled a novel way of catching some kip at work without your colleagues finding out – a pair of OLED “glasses” designed to act as digital eyes.

It features two small OLED screens fixed to a spectacles frame which the user wears as per a normal pair of glasses.

However, these small panels display a pair of eyes and are linked to a built-in accelerometer, gyrometer, microphone and chip as well as an external camera.

This means the digital eyes can make eye contact with people even if the user is looking elsewhere, or if their eyes are completely closed. They can also be pre-set to register different emotions.

The idea is to “extend our social skills and decrease our emotional labour” by removing the need for the user to appear interested, alert, happy etc around people when they’re not.

In reality, however, as this video clip (h/t AFP) shows the AgencyGlass has the effect of making the user seem at best mentally unstable and at worst downright creepy.

Osawa apparently sees a future for his wacky invention in the service industry, where roles such as flight attendant routinely require employees to behave differently from their actual feelings – in Japanese the concept of honne and tatemae.

One wonders, however, whether strapping on the AgencyGlass would have quite the desired effect on passengers.

So far, no major backers are eyeing this one up. ®