Even without carrier backing, 'a few countries' will get Linux-based mobes 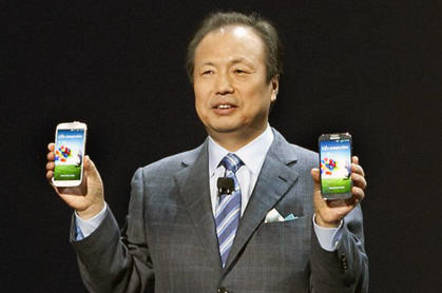 Hope springs eternal for wannabe Android competitor Tizen, with Samsung saying it plans to ship the first smartphones based on the open source OS in the second quarter of 2014 – carriers' cold feet be damned.

In an interview with Reuters, Samsung senior VP of product strategy Yoon Han-kil said the Korean firm plans to release "at least two" Tizen handsets this year, but admitted that Android "still needs to be [Samsung's] main business."

Samsung has been threatening to ship phones running its Linux-based pet project for a while now. Its problem has been securing support from carriers.

At one time, Samsung claimed that both NTT DoCoMo and Orange had signed on to offer Tizen devices on their networks, but when development delays made the shipping date for a commercial release of the OS uncertain, both carriers pulled out, citing market conditions.

A DoCoMo spokesman went as far as to say "the market is not big enough to support three operating systems at this time" – by which he meant Android and iOS (sorry, Microsoft and BlackBerry), which account for more than 99 per cent of the Japanese smartphone market.

Samsung takes the opposite point of view. Despite being the world's largest vendor of Android phones, the chaebol has been developing Tizen as a hedge against what it sees as Google's growing dominance of the smartphone OS market.

The problem is, as good as it might sound on paper – and on paper, at least, Tizen is already on version 2.2.1 – nobody has ever seen a Tizen phone, aside from a few developer models handed out at conferences.

Oh, Tizen is real enough, all right. Samsung has even shipped devices running it, but so far they have been cameras and smartwatches, not phones.

Meanwhile, Jolla and Mozilla have already beat Samsung to market with real-world devices running Linux-based open source mobile platforms of their own – Jolla addressing the midrange to high end of the market and Mozilla attacking the low end – and Ubuntu's smartphone variant is also waiting in the wings.

Given so much competition (including Apple and Google, two heavily entrenched rivals with deep pockets), market success for Tizen at this point seems like a vanishingly long shot.

Ever the optimist, however, Samsung says it will release two Tizen models in the coming months, including one aimed at high-end customers and a second that will be more of a mid-priced item. Yoon told Reuters that if Tizen devices can reach around 15 per cent of Samsung's total shipments, the Korean firm will consider the OS a success.

Just don't necessarily expect them to arrive in a carrier's retail store near you.

"We have changed our strategy and will release the phones in a few countries where we can do well," Yoon said. Further details were not available. ®