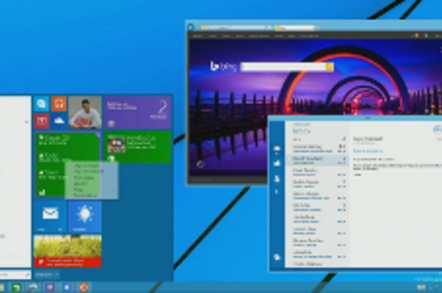 Microsoft Research has revealed, and then hidden, a new design for Windows 8.

The three videos were posted late last week on a Microsoft Research web site (404 here if you really want it) and were pulled within hours. But not before WindowsBlogItalia was able to hoover them up into YouTube.

The first video, below, shows Live Tiles as shortcuts to a mini-app. At about the 1:15 mark, for example, you'll see how tapping on the Mail application's Live Tile invokes a simple mail app rather than leaving the Start screen to open Mail. Describing this feature, the un-named speaker says it is designed to “empower the Modern UI as the main entrance to Windows Next.”

The video also shows the music app enhanced with controllers to select and play tracks, all without leaving the Modern UI. The idea seems to be to let you stay on the Start screen for longer, rather than going in and out of Modern apps.

The second video looks a little more speculative, as less of the action is on-screen and more of the features look like they're the result of clever film editing rather than working code. On display is interactive Live Tiles operating alongside conventional apps, plus integration between Windows on different platforms.

Are these videos hints of Microsoft's future directions? A big hint can be found in the fact the speakers wear T-shirts with a “TechFest” logo. TechFest is an internal gathering that sees Microsoft researchers from around the world gather to share their latest ideas. Plenty of things shown at TechFest never again see the light of day.

That Microsoft has taken down these videos from its own site could mean that's the intended fate for these tweaks to the Windows UI. Or it could mean Redmond only wants this stuff to be seen in public at a moment of its choosing. What do YOU think? ®