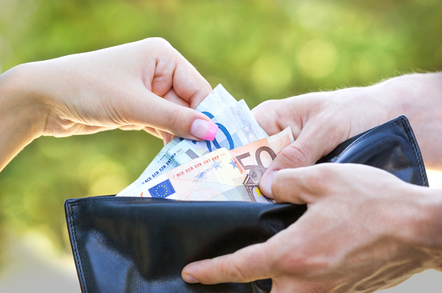 Facebook is planning to launch a mobile payments service that would allow its European users to store and exchange funds via the social network, sources claim.

According to a report in the Financial Times, Facebook has filed an application with the central bank of Ireland to become an "e-money" institution under EU regulations and is "weeks away" from gaining approval.

Should it succeed in acquiring that status, it would be free to act as a payment institution throughout Europe, thanks to a provision of EU law known as "passporting".

Just what CEO Mark Zuckerberg wants to do with his own mini-PayPal isn't clear – and the company isn't discussing its plans – but there are all sorts of possibilities.

Facebook already processes in-app payments for developers who build games that run on its platform, a service for which it collects fees of up to 30 per cent.  According to its most recent annual report to the Securities and Exchange Commission, in 2013 it handled transactions worth upward of $2.1bn, and its fees from these contributed around 9 per cent of its revenue.

Significantly, however, all of those transactions came from the browser-based, desktop version of Facebook. The social network does provide APIs for mobile apps to integrate with it, but so far those apps have not used Facebook's payment infrastructure to process payments.

Becoming licensed as a more generalized payments processor could help Zuck & Co. break into the lucrative in-app mobile payments business. It could also potentially allow it to act as middleman for one-to-one financial transactions between its users.

On the darker side of things, knowledge of its users' buying habits could also help Facebook sell more – and better-targeted – ads.

But breaking into the e-money biz won't be easy. According to Facebook's annual report, obtaining new regulatory licenses "will generally require us to demonstrate compliance with many domestic and foreign laws relating to money transmission, gift cards and other prepaid access instruments, electronic funds transfers, anti-money laundering, counter-terrorist financing, gambling, banking and lending, and import and export restrictions."

What's more, becoming licensed is no guarantee of a successful business. Three years after its launch, Google Wallet is still struggling to find users, to say nothing of companies willing to accept it for payments.

Even if it doesn't win many customers in the US or UK, however, operating a mobile payment system could be one way for Facebook to generate revenue in developing markets, where ads don't pay much yet and people rely less on credit cards. After all, it has to make money from those 100 million Indian users somehow. ®