Russian deputy PM: 'We are coming to the Moon FOREVER'

Plans to annex Earth's satellite with permanent base by 2030 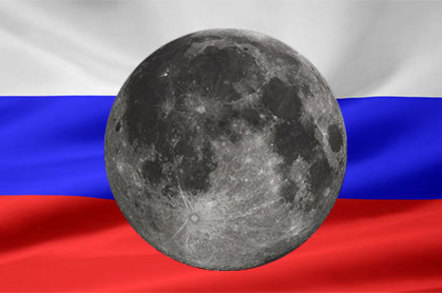 Barely six weeks after rolling troops into the Crimean Peninsula, an official from Vladimir Putin's Russia has announced the country's next expansion target: the Moon.

As reported by the Voice of Russia, Russian Deputy Prime Minister Dmitry Rogozin told the government daily Rossiiskaya Gazeta that establishing a permanent Moon base has become one of the country's top space priorities.

"The moon is not an intermediate point in the [space] race, it is a separate, even a self-contained goal," Rogozin reportedly said. "It would hardly be rational to make some ten or twenty flights to the moon, and then wind it all up and fly to the Mars or some asteroids."

Rogozin's comments were an obvious dig against the US space program. NASA flew its last manned mission to the Moon in 1972 and currently has no plans to return humans to the Earth's satellite. The space agency's next major objective is to rendezvous with an asteroid, and a manned mission to Mars is a perennial favorite topic among US politicians, even if they seem unwilling to provide NASA the funding needed for such an endeavor.

Russia, on the other hand, has a series of missions to the Moon in the planning stages, albeit unmanned ones for now. The first will be the Luna-25 rover, which is scheduled to launch in 2016. After that will come Luna-26, an orbiter that will map the lunar surface, followed by another rover that will explore the Moon's south pole.

But Russia's lunar ambitions don't end with robots. Earlier this week, Denis Lyskov, deputy director of the Russian space agency Roscosmos, told the Voice of Russia that work has begun on a new rocket that will be able to carry a manned spacecraft to the Moon.

"It requires a carrier rocket of extra-heavy class with carrying capacity of 80 tons to perform flights to the Moon," Lyskov said. "The program of such carrier rocket is being elaborated. The government has ordered to elaborate the program so that it could make a particular decision on it."

If a series of manned Russian Moon missions is successful, officials say Roscosmos plans to build a permanent lunar base toward the end of 2030. Or maybe that's 2040; sources differ. One thing is for sure, though, and that's that Russia has big Lunar plans.

"This process has the beginning, but has no end," Rogozin told Rossiiskaya Gazeta. "We are going to come to the Moon forever." ®

BepiColombo launches, Russia ponders next lift-off, and 50 years since Apollo 7 got its feet wet

Roundup The week in spaaaaaace

Inflatables, solids, strap-ons and riders – oh my, it's the week in space

Roundup Also, decoding the Donald and opening up BEAM