Sony battery recall as VAIO goes out with a bang, not a whimper

The perils of having Panasonic as a partner 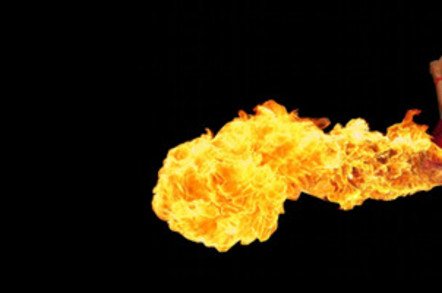 If you're one of the few people who bought a Sony VAIO Fit 11A laptop/tablet convertible unit in the last few months, you need to unplug it immediately and step away from the system, Sony has warned.

"It has come to our attention that some of the internal, non-removable battery packs provided to us by a third party supplier and included in VAIO Fit 11A released in February 2014 have the potential to overheat resulting in partial burns to the housing of the PC," said the troubled Japanese zaibatsu in a recall notice.

The laptops went on sale in February and are the last to bear Sony's VAIO brand. The company said three cases of overheating had been reported so far and, in all, over 25,000 systems will have to be returned for replacement or repair.

Sony said that around half of the afflicted laptops, which the company ceased selling at the start of the month, were sold in the Far East, with another 7,000 being shipped to European markets. Sony sold just 500 units to the US market, but users are advised to check the serial numbers of their system just to be on the safe side.

Panasonic confirmed to The Wall Street Journal that it supplied the built-in batteries to Sony for this model as part of an outsourcing contract. None of the other companies it supplies with batteries have reported any similar problems, a spokeswoman said, noting that the Sony supplies were a custom job for this particular laptop.

It's not the first time VAIO's have had problems. Sony was forced to recall some systems in 2006 after the batteries it used – and that were supplied to many other manufacturers – proved to be faulty and prone to ignition. It also issued partial VAIO recalls in 2003, 2008, and 2009 for electrical and chip problems.

The VAIO, introduced in 1997, was Sony's premium laptop line and achieved a lot of success thanks to a mixture of raw grunt, tiny form factor, and stylish design. The laptops came at a significant price premium, which consumers were happy to pay for a while, but they fell out of favor as cheap and stylish systems from other manufacturers came online and netbooks cannibalized the small-computer market.

Last month Sony announced it was selling off its entire laptop line to Japan Industrial Partners (JIP), dropping manufacturing in favor of concentrating on the tablet and mobile phone markets. Ever since 2009 the company has been in financial trouble, and is slimming down its operations to profitable business units only. ®