Apple has THREE TIMES as much cash as US govt, TWICE the UK 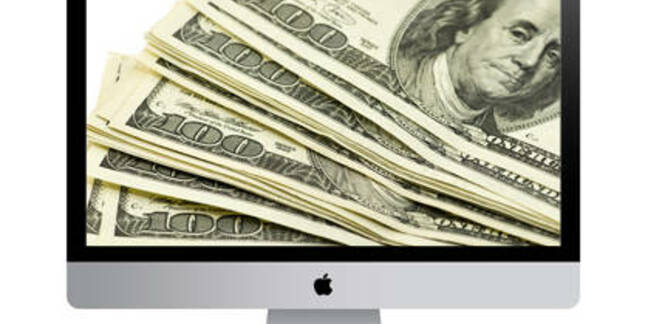 Apple has three times as much cash on hand as The US government, and over twice as much as the UK.

These figures come to us from the Bank of America's wealth-management arm, US Trust, as reported by London's Telegraph.

In its most recent quarterly SEC filing, Apple reported that it had $158.8bn (£94.9bn) in cash and cash equivalents plus short- and long-term securities. US Trust reports that the cash-strapped American government has reserves of just $48.5bn (£29bn), while the folks in Blighty are doing rather better with reserves of $70.3bn (£42bn).

Microsoft is also in a better cash position than both the US and the UK, with reserves of $83.7bn (£50bn), US Trust reports. But that's just a smidgen over half of Apple's hoard – and, your humble Reg reporter gloats, below that of his own ancestral home of Poland, which is sitting on $98.8bn (£59bn – or, more properly, zł296.9bn).

While Apple may have the heftiest load o' cash in the known world, Microsoft keeps a far greater proportion of its reserves outside of the US to avoid US taxes. According to a report by Bloomberg last month, Microsoft has $76.4bn offshore, while Apple's offshore profit holdings stand at $54.4bn. That's 91 per cent for Redmond and 34 per cent for Cupertino.

All told, Bloomberg reports, US companies hold $1.95tr – that's trillion, with a "t" – offshore, an increase of $206bn over the previous year. General Electric, by the way, is the top offshore tax trickster, with a full $110bn being held outside the US.

Bottom line: US companies are flush with cash, and great gobs of that gelt are sitting offshore to avoid a tax system the current US Congress appears too paralyzed to overhaul completely. Relations between lawmakers on either side of the House are currently too fractious to orchestrate any sort of repatriation strategy.

What's wrong with this picture? ®