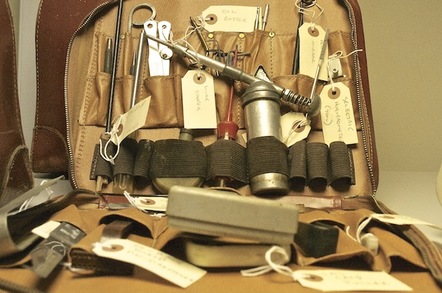 Geek's Guide to Britain Would you like to work in a cross between Downton Abbey and Silicon Valley? For a small selection of IBMers, that’s the only way to describe their working environment, although the place we’re talking about is officially called Hursley Park.

You can get there by turning off the M3 and rattling through some pretty English village-hood before hitting Hursley, a high-end hamlet straddling the A3090. Cross over, skirting the stone bench built around a tree trunk, and you’ve entered the gateway to the Hursley Park estate, home to an IBM R&D lab since the late '50s.

It was cold and grey the day we went. Chain link fences on either side of the road make it feel like you’re entering some kind of government research facility. Think Baskerville in the BBC’s 21st century take Sherlock. However, this slightly forbidding entry quickly gives way to wide open green parkland with wooden paddock fencing.

A pheasant perched on a fence post looked completely unconcerned as we set course for the main house. While there are signs aplenty for the IBM tennis and cricket clubs, presumably there’s no shooting club.

The estate itself has a chequered history, at one time belonging to Oliver Cromwell’s son Richard; then the Heathcote family, who built the guts of the current house; the Baxendale family - owners of Pickfords; and then the Coopers, who massively extended the Heathcote’s house.

So far so Brideshead. But things took a high-tech turn in the 1940s, when the house was requisitioned by the government and became a country hideout for Vickers Supermarine's design team, where they carried out refinements of the Spitfire and Hurricane, and laid the groundwork for the UK’s post-war jets.

After the... let’s say... consolidation of the British aerospace industry, an up-and-coming US technology firm called IBM moved into the building in the 1950s, initially using the house as a development lab, before buying the estate in full in the 1960s.

The site has been instrumental in the development of IBM’s software technologies since the 1950s, as well as displays and disk-based storage, though those lines have now departed. It is still the home of development for CICS MQ Series technology. Or, put another way, the software that probably runs transactions on the mainframe underpinning your retail bank, and ensures the oil finds its way along the pipeline to your local petrol station.

Pulling up outside the house itself feels like the beginning of an intimate weekend in a country house hotel. Open fields to the left, woods to the front, imposing Queen Anne portico to the left. Where are all the engineers, we wonder, before musing on whether we can expect an imposing yet slightly eccentric butler to announce our arrival.

We then realise we’re at the wrong entrance. A walk around the side, past the old house’s orangery/conservatory, brought us to the thoroughly modern plate-glass reception area, which fronts the vast complex of development labs.

We were picked up by our minder for the day, John from IBM’s press operation, rather than a trusted family retainer, and taken into the main complex.

The wall immediately behind the lobby was lined with portraits. These were not of Hursley's previous inhabitants, but of the current inmates, complete with job titles like senior inventor.

Our first move was to walk back to the grand house, via a covered walkway which connected via the conservatory. En route, we passed a massive model of the site, which revealed just how much office and lab space had been plonked down in this quiet corner of Hampshire. How had IBM managed to get this all past the planners and into the middle of Jane Austen land? Mainly by building over the footprint of the massive hangars and drawing rooms that had been there previously, courtesy of Vickers - brownfield development, before the term was actually invented.

Into the main house and up to check in with John Mclean, IBM VP and lab director (Mclean has since become IBM VP and CTO for Europe). And then it was time to descend into the bowels of the house – to visit the museum... in an R&D centre.

But surely it was just a collection of knick-knacks to amuse passing visitors? Shouldn’t it be in reception?

Next page: IBM's skeletons in the basement
Page:
Tips and corrections
46 Comments