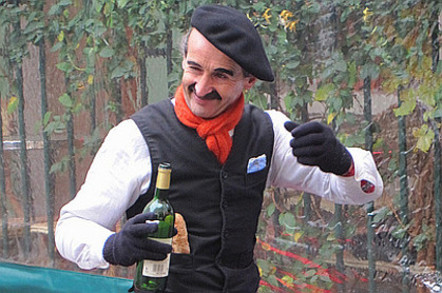 A new agreement between employer organizations and labor unions in France has made it illegal for French managers to contact their employees about work-related matters outside of normal business hours.

The agreement [PDF], which amends an existing pact signed in 1999, specifies that employees must have "the opportunity to disconnect from remote communication tools at their disposal" (in the words of Google's Francophone translating robots) to ensure that they comply with strict rules on working hours.

That means French workers who receive emails or calls from coworkers or the boss at dinnertime can now safely ignore them without fear of retribution.

French companies won't be the only organizations in Europe to follow such rules. Germany's labor ministry has enacted a similar policy for its own employees as an example for German companies to follow, and several large Teutonic firms have already done so, including Deutsche Telekom and Volkswagen.

Some German companies have reportedly even set their email servers to stop forwarding messages outside business hours by default.

The French labor agreement, however – which is legally binding – will be the first time such rules are foisted upon European companies at the national government level.

France already has some of the strictest labor laws in Europe, if not the world. French workers get a minimum of five weeks' paid time off per year – and often more – and in 2000, Prime Minister Lionel Jospin's government introduced the notorious 35-hour workweek. Other rules stipulate a minimum number of consecutive hours an employee must be away from work per day and per week before being required to return, and so on.

Support for such hardline policies is not universal, however, and many right-leaning French folk have argued that the country's labor laws make it too difficult for national companies to compete in the modern, global business landscape.

In the case of the new "after hours" rules, certain classes of workers will be exempt, but these will mostly be managers, meaning even some employees of the French branches of US tech companies like Facebook and Google will be forced to put down their iPhones and laptops at 6pm.

As a result, it's very possible that the latest labor agreement will be short-lived in its current form, and that future amendments will loosen up the rules.

For example, successive increases in the amount of allowed overtime have caused the average French employee's real-world working hours to creep ever closer to the more typical 40 hours per week.

And then there are the courts. France's supreme court, the Cour de cassation, invalidated a previous labor agreement last year, and it's possible it could take a similarly dim view of the current one's terms.

For today at least, however, French workers are free to switch off their phones and log out of their email the moment they leave the office. As for what happens tomorrow, qui vivra, verra. ®