Result? 'Way more carbon being released into the atmosphere as methane' 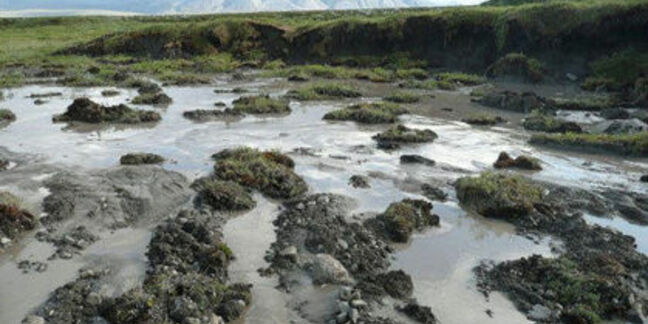 A team of researchers has discovered new evidence that as the permafrost layer that covers 24 per cent of the Northern Hemisphere continues to thaw as global temperatures increase, not only does it release more greenhouse gasses into the atmosphere, but as time goes by the ratio of carbon dioxide (CO2) to methane (CH4) changes from 10:1 to 1:1 as more and more methane is released.

Methane is a far more powerful greenhouse gas than carbon dioxide, "33 times more effective at warming the Earth on a mass basis and a century time scale relative to carbon dioxide," according to a press release announcing the results of the study.

"We've known for a while now that permafrost is thawing," said Suzanne Hodgkins of Florida State University in the release. "But what we've found is that the associated changes in plant community composition in the polar regions could lead to way more carbon being released into the atmosphere as methane."

Hodgkins is the lead author of a eight-member team that conducted the research resulting in a paper, "Changes in peat chemistry associated with permafrost thaw increase greenhouse gas production", published in the latest edition of the Proceedings of the National Academy of Sciences.

The paper explains that the proportions of CO2 and CH4 released into the atmosphere from melting permafrost depend upon a number of factors, and the one that was least understood was the changes in the chemistry of organic matter as the thaw progresses. That's what the team sought to get a handle on.

To do so, they examined a series of recently to fully thawed sites in Stordalen Mire, a thawing peat plateau in northern Sweden that has been a site for carbon-cycle research since the 1970s.

In a nutshell, when frozen peat thaws it collapses and inundates areas of permafrost below it. Organic matter in the water is degraded by anaerobic bacteria to produce carbon dioxide and methane. At first, that degradation produces far more CO2 than CH4, but over time CH4 catches up as the chemical processes and vegetation distributions change.

Or, as the paper's Abstract explains in more boffinary terms:

As one of the paper's authors, professor Jeff Chanton of Florida State University, said in the press release, "The world is getting warmer, and the additional release of gas would only add to our problems."

After the next muscular El Niño, it will be interesting for the international team of researchers to travel back to the Stordalen Mire to check on the mushiness of the methane-releasing not-so-permafrost. ®