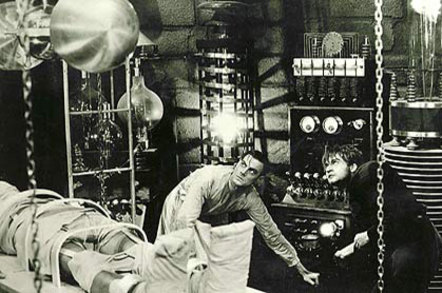 The makers of the micro-sized Raspberry Pi teaching computer have come up with an even smaller version of the device, this time aimed at hardware hobbyists and device builders who want to create their own printed circuit boards (PCBs).

The forthcoming product, dubbed the Raspberry Pi Compute Module, forgoes the various ports and connectors provided by the original Raspberry Pi and offers just the brains, including the Broadcom BCM2835 system on a chip (SoC), 512MB of RAM, and a 4GB eMMC flash storage device. As with the original Pi, these chips are all soldered to the board, so they can't be upgraded.

The advantage of the Raspberry Pi Compute Module is that it delivers these components – and full software compatibility with the original Raspberry Pi – on a 67.5mm-by-30mm board that can be slotted into a standard DDR2 SO-DIMM connector. (Sort of; the Pi peepz have cleverly appropriated the connector, but the pin assignments on the board are completely different from those of memory DIMMs.)

The idea is that tinkerers will be able to create custom PCBs for their unique applications and then slot in the Raspberry Pi's smarts to run the show.

Of course, until developers actually build these custom PCBs, the Raspberry Pi Compute Modules will be little more than paperweights. On their own, they can't do anything.

So to help kick-start this new direction for their diminutive devices, the Raspberry Pi team have come up with a reference PCB, known as the Compute Module I/O Board. This simple board provides the basic underpinnings necessary to program the Compute Module's flash and get it up and running, including HDMI and USB ports for user I/O. 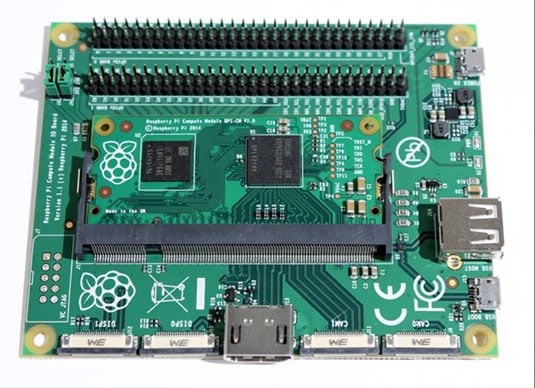 The Raspberry Pi Foundation says kits that bundle one Compute Module and one I/O Board will be available from RS and Element14, its retail partners, sometime in June.

Shortly after that, the Compute Module will begin selling on its own, at a unit cost of around $30 (roughly $5 less than the full-fat Pi sells for). The catch is that if you want them at that price, you'll need to order them in batches of 100. You'll be able to buy individual Compute Modules, too, but the Foundation says the price will be "slightly higher" if you do. No pricing for the kit including the I/O Board was given.

As usual, all proceeds from sales of the new boards will go to fund the not-for-profit Foundation's ongoing education efforts. And like the original Pi, the Compute Module and its I/O Board are both fully open source; the Foundation published schematics for each on Monday and said more documentation will be provided soon. ®