Microsoft: Hey, small biz devs – Windows Store apps are for you, too 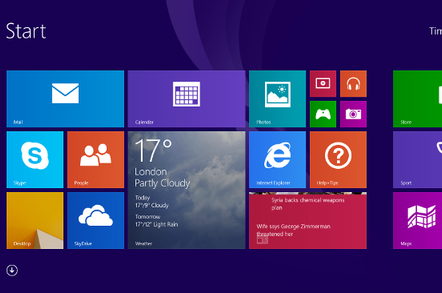 Build 2014 We reckon there haven't been many line-of-business apps built for Windows 8's Modern UI so far, but Microsoft has now made it easier for companies that want to do so.

Most Windows 8 Apps are downloaded and installed from the Windows Store – which is why Microsoft has taken to calling them "Windows Store Apps" following the trademark kerfuffle that killed off the earlier "Metro" designation.

But businesses often don't want their software to be hosted on a public app store, even when the apps are only discoverable by people who know the right URL.

To that end, Redmond has offered a little-publicized method of "sideloading" apps onto Windows 8 machines, but so far it has been cumbersome and typically involved buying special Windows activation keys from Microsoft, each of which had to be permanently assigned to a single device. What's more, the keys cost around $30 each but were only available in packs of 100, effectively shutting out small businesses.

With the forthcoming release of Windows 8.1 Update – which is already available for download by MSDN subscribers but will ship to the public on April 8 – Microsoft has made the process much simpler.

With the new release, all Windows 8.1 Pro machines that are joined to an Active Directory domain are automatically eligible for sideloading, eliminating the need for a sideloading activation key. Previously, this was only true of the Windows 8.1 Enterprise version, which is only available through Volume Licensing.

In addition, customers who are enrolled in a number of Microsoft Volume Licensing programs will be provided sideloading keys for each of their machines free of charge, beginning on May 1. This applies to the Enterprise Agreement, Enterprise Subscription Agreement, Enrollment for Education Solutions, School Enrollment, Select, and Select Plus licensing plans.

Finally, customers who don't fit either of these criteria but who want to sideload apps will be able to purchase new sideloading keys through Redmond's Open License program, also beginning on May 1. The new keys will cost $100 apiece, and each can be used to enable sideloading on an unlimited number of devices.

"With these changes, we believe all organizations will be able to leverage sideloading for all of their Windows 8.1 Pro, Windows 8.1 Enterprise, and Windows RT 8.1 devices," Microsoft's Ben Hunter wrote in a blog post.

You got your legacy code in my Windows app!

At the same time, Redmond has quietly enabled two new features for sideloaded apps in the Windows 8.1 Update, both of which are designed to make Windows 8 apps more attractive to maintainers of legacy business software.

The first is network loopback, which allows sideloaded apps to connect to internet servers running on the local machine via a localhost address. Those servers can then potentially perform actions that might otherwise be forbidden by the Windows Store app sandbox security model.

The second new feature is called Brokered Windows Runtime Components, and it allows Windows 8 app developers to invoke desktop Windows code as a server that can communicate with a Windows Store UI component via inter-process communication (IPC). The catch is that so far it only works with C# code targeting .Net 4.5 for Windows 8.1.

Both features make it easier for developers to take business logic from existing applications and wedge it into new, touch-friendly Windows Store apps. But because of their inherent security risks, both features are only available for sideloaded apps, and apps using either will be rejected from the Windows Store.

Developers who are interesting in trying out either technique can download sample source code from Microsoft's enterprise development website. ®