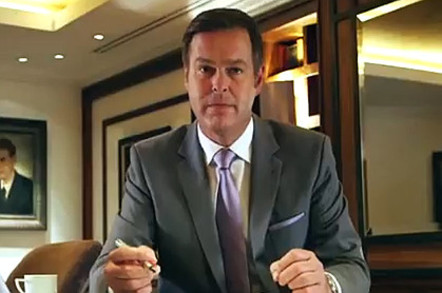 Biz celeb Peter Jones, who moonlights as a board member at gadget etailer Expansys in between edgy appearances on TV's Dragons' Den, has confirmed that his company's Euro president is to depart.

Longstanding exec Frederic Pont has resigned and is due to stand down at the end of the month, Jones told us, during a momentary break from filming the latest series for the Beeb.

"Yes," the DD nastyboy said when asked if Pont is leaving, adding "probably Anthony Catterson [Expansys CEO] is the best person to speak to. I'm doing TV stuff at the moment.

"He [Pont] was a very good guy, was with the group for six or seven years," continued Jones, who also stated: "I don't know who is going to replace him."

Expansys resells all manner of phondleware and other gadgetry online: but the group also includes DSNS, a SIM card distributor, and PJ Media, which designs and builds e-commerce platforms.

By the time Pont - who served in fact for 11 years and six months - waves goodbye to colleagues at month end, the AIM-listed company will no longer be traded on the stock market. (It floated in 2007 under founder and then CEO Roger Butterworth).

Jones, via acquisition vehicle PJBidco, launched a £6.1m buy-out in January. The Dragon owns more than 51 per cent of stock, and with bidding partners, a near 66 per cent.

The offer was upped to £7.55m in March and approved by shareholders. Shares will no longer be traded on AIM by 14 April, the company confirmed recently.

At 0.65 pence per share, this won't be a bad piece of business for Jones: investors coughed 5.6 pence in July 2010 in a shares placement just months after the Dragon bought out Butterworth for £1.6m.

Two thirds of the £30m raised were used to help fund Expansys' £38m purchase of DSNS and PJ Media, which were respectively owned and part owned by Mr Jones.

Catterson told us the firm has yet to confirm a successor to Pont:

"Peter has only just bid to take the business private. We'll integrate the Data Select [DSNS] business relatively quickly, and as we do that we'll confirm the management structure".

He said the departing Pont had decided to set up a business in a "related sector", not in the telco space, but added it was not his place to reveal the outgoing president's plans.

"It will not be a direct competitor, it may end up being a customer or a supplier. I can't be more specific".

Pont did not respond to calls or an email for comment, but if he does, we'll let you know what he's planning. ®